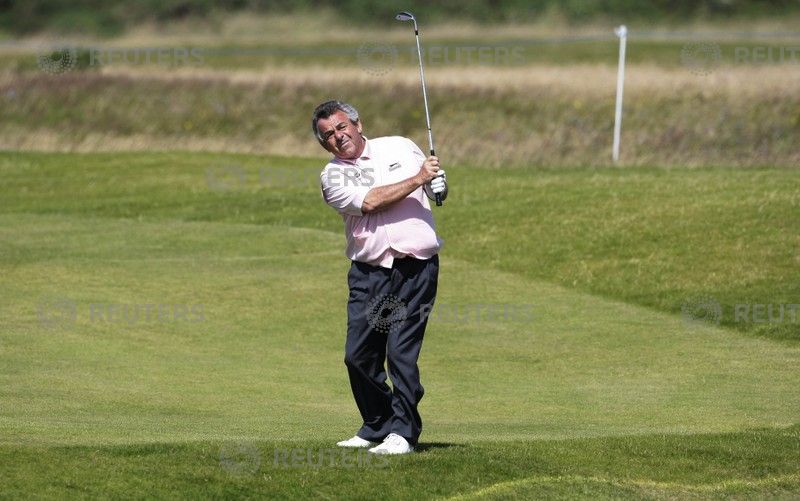 LONDON (Reuters) – Ryder Cup great Tony Jacklin has urged his sport to take a leaf out of squash’s book by using colour-coded balls to distinguish the professional game from the amateur one in the modern era of ‘grip it and rip it golf’.

Jacklin is concerned at the way long hitters are dominating professional golf, an issue that came to the fore again when Cameron Champ, probably the longest driver seen on the PGA Tour, clinched his first win at Sunday’s Sanderson Farms Championship in Mississippi.

Champ started to attract a lot of attention on the secondary Web.Com Tour in 2017, averaging a single-season record of 343 yards off the tee.

“Cameron is like a lot of guys on tour these days, they smash it a mile,” said Jacklin, the most successful European captain in Ryder Cup history. “And most courses are set up to allow them to do it because there is no premium on accuracy any more.

“It seems like everyone has bowed to new technology. The ball goes miles which also means we need longer golf courses, making them more expensive to maintain and having the negative impact of taking more time to play 18 holes.

“Meanwhile, the amateur game seems much the same as it ever was. I believe we could start to adapt by going the way of squash and using different colour-coded golf balls for the professionals and for the amateurs,” said Jacklin.

“Let’s have one colour for the ball that goes the furthest, then cut the distance 20 or 30 percent and use a different colour. You would get round quicker while courses would be shorter and less expensive to run.”

Squash balls for senior players come in six varieties, each with different levels of bounce denoted by coloured dots. For younger players, there are a number of mini-squash balls that have a high, prolonged bounce.

Jacklin, who also won the 1969 British Open and 1970 U.S. Open, believes modern-day golf has become too one-dimensional, with imagination and creativity in short supply.

“It’s become a bit ridiculous,” he said. “The skill of the game, shaping shots, keeping the ball in the fairway, they were attributes that used to be very important.

“The R&A and the USGA need to do something about the ball but they are frightened the manufacturers will start gunning for them if they make the decisions that need to be made,” said Jacklin, who won two matches as Ryder Cup captain in the 1980s and tied another one.

“All the advertising that comes from the manufacturers is based on how far the ball can travel. The players play for millions of dollars every week and maybe that makes the decision-making harder. The governing bodies don’t want to rock the boat.”

The R&A, who govern golf along with the USGA, are in the middle of a ‘Distance Insights’ initiative where one of the aims is to discover how players of all standards perceive the way distance, and its impact, might evolve in the future.

“We are currently gathering data from a variety of sources as part of the Distance Insights project and welcome submissions from individuals and organisations who have a perspective on this issue,” said an R&A spokesman.

Jacklin believes American Phil Mickelson’s criticism of the narrow fairways in Paris during Europe’s Ryder Cup victory over the U.S. in September is symptomatic of the modern-day thinking of professionals.

“I was gobsmacked to hear Phil saying he’d never play another course like Le Golf National again,” said the 74-year-old Englishman. “From my point of view, and the point of view of most experts, it was a fantastic course.

“It’s a sad reflection on the game the likes of Peter Thomson, Bobby Locke, Ben Hogan and Jack Nicklaus used to play.”