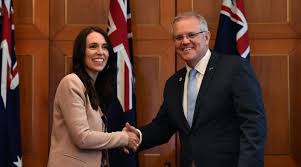 The day after the Senate repealed the medevac legislation, after the Tasmanian independent Jacqui Lambie was understood to have been given assurances about faster resettlement, and Scott Morrison left the door open to accepting the New Zealand offer, Ardern said what happened next was up to Australia.

Ardern told Sky News New Zealand’s offer “has not changed, but the ball is obviously in Australia’s court”.

The longstanding resettlement offer remained current but “ultimately the ball has sat domestically with Australia for quite some time”.

The New Zealand prime minister said there had been no high-level discussions with Australia about resettlement in recent days, so “as far as I’m concerned we are in the same status quo that we have been in for some time”.

She was sanguine about the Morrison government moving to shut backdoor entry to Australia if the Coalition accepted the resettlement offer. She said if there was a two-tier system created where some New Zealand citizens had rights to come to Australia and others didn’t “it would be created by Australia and it would be within their own domestic policy if they chose to do that”.

Asked if she would be comfortable with that restriction, Ardern said: “It would be a matter for [Australia].

“The way they place restriction on movement is something for them, not for New Zealand.

“Of course we would want to maintain as much consistency as we were able to on the part of New Zealand citizens but it is a domestic issue. In the same way as I cannot tell Australia to stop deporting those who have no connection to New Zealand, I will express a view on it [but] is still a matter for them.”

The Morrison government has wanted to pass legislation ensuring that any asylum seeker or refugee from any country who arrived by boat cannot ever visit or settle in Australia.

In September, Labor offered to pass the proposed lifetime ban legislation if it was restricted to the cohort transferred to, and resettled in, New Zealand. The Labor proposal would limit the legislation’s application to the Special Category Visa (Subclass 444), which enables the open travel of New Zealand citizens into Australia.

When Lambie voted in favour of repealing medevac on Wednesday, she told the chamber she had discussed a national security-related proposal with the government, ensuring that things would not continue as they have been in offshore detention.

The independent declined to give details, but a number of Lambie’s colleagues and associates say she was given an undertaking from the prime minister that resettlement would be accelerated.