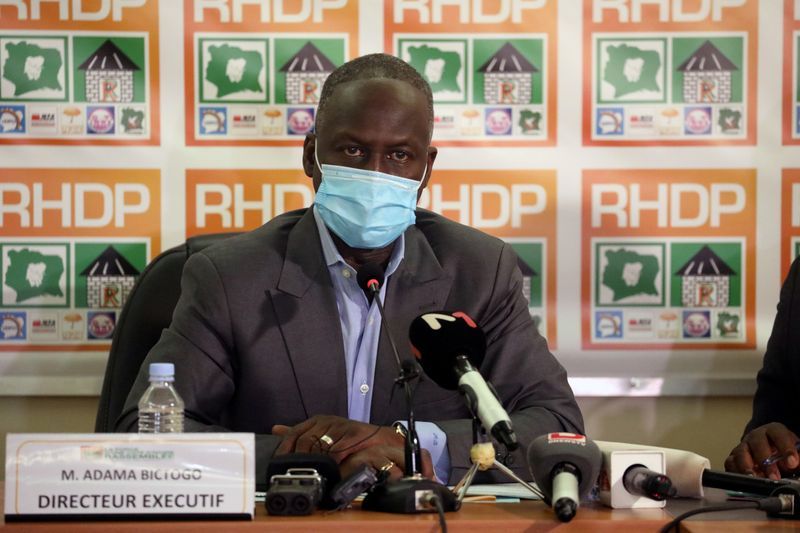 FILE PHOTO: Mr Adama Bictogo, the executive director of the RHDP (Rally of the Houphouetists for Democracy and Peace) the ruling parties coalition, talks during a crisis meeting at the headquarters of the RHDP, a day after the death of Ivory Coast Prime Minister Amadou Gon Coulibaly, in Abidjan, Ivory Coast July 9, 2020. REUTERS/Luc Gnago

ABIDJAN (Reuters) – Ivory Coast’s ruling party said on Tuesday it will push ahead with the October election regardless of whether the opposition participate, comments likely to deepen political tensions in the world’s top cocoa producer.

At least a dozen people have been killed since riots broke out last month after President Alassane Ouattara declared he would run for a third term, following the sudden death of his handpicked successor in July.

Last weekend, Ouattara’s main challenger Henry Konan Bédié called for civil disobedience and reform of the electoral commission and the constitutional court, but opposition parties have stopped short of saying they would boycott the poll.

“We will go to the presidential elections in October with or without the opposition. President Ouattara is ready and will go to these elections alone if necessary,” Adama Bictogo, executive director of Ouattara’s party, told journalists.

The opposition has said that Ouattara, who has been in power for a decade, is violating the constitution by seeking another term. The 78-year old president says a constitutional change means his two-term limit has been reset.

Ivory Coast’s Constitutional Council has cleared Ouattara, former president Bedie and two other candidates to contest in the vote.

“The opposition is not ready to go to the elections and is using tricks to delay or postpone them. There will be no postponement,” Bictogo said.

The recent violence sparked memories of 2010-11, when 3,000 people died in the civil war in the country – the world’s top producer of cocoa.