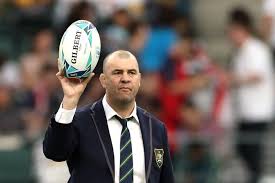 OITA, Japan (Reuters) – Australia coach Michael Cheika said on Sunday he would not seek to be re-appointed when his contract expires at the end of 2019, bringing an end to his often troubled five years in charge.

The Wallabies were knocked out of the World Cup in the quarter-finals on Saturday when they were well beaten 40-16 by an England side coached by compatriot Eddie Jones.

Cheika, nicknamed ‘Cheik’, had previously said he would step down if Australia did not improve on their run to the final in 2015 and win the World Cup for a third time in Japan.

He accused reporters of lacking compassion when he was asked about his future in the immediate aftermath of the match at Oita Stadium but on Sunday said he had always intended to step down.

“At the time I wasn’t keen to answer but I always knew the answer in my head, I just wanted to speak to my wife and tell a few people up there about it,” he told rugby.com.au.

“I put my chips in earlier in the year, I told people no win, no play.

“So, I’m the type of man who is always going to back what he says and I knew from the final whistle but I just wanted to give it that little bit time to cool down, talk to my people and then make it clear.”

New Zealander Dave Rennie, the former coach of the Waikato Chiefs and current Glasgow Warriors boss, has been strongly linked with the post in the Australian media.

Cheika took over when Ewen McKenzie suddenly quit the job just over a year before the 2015 World Cup and revitalised the Wallabies before leading them to the final in England, where they lost to New Zealand.

The 52-year-old built his coaching reputation by being an agent of change, taking over at Irish province Leinster and the New South Wales Waratahs and quickly leading them to European Cup and Super Rugby titles respectively.

The former number eight found the task of rebuilding his Wallabies squad after a rash of retirements more difficult, however, and he blooded dozens of players over the next three seasons.

Australia were swept 3-0 by England in a home June series in 2016 and the results continued to deteriorate until they reached a nadir in 2018, when the Wallabies lost nine of 13 tests.

Cheika might well have been sacked then but cash-strapped Rugby Australia instead decided to appoint Director of Rugby Scott Johnson above him and a selection panel to jointly decide the team.

“It’s no secret I’ve pretty much got no relationship with the CEO and not much with the chairman,” Cheika said.

“Scott’s a lovely bloke and I get on fine with him but I’m not really into that type of thing, I like to take that responsibility.”

His reign also covered the period of the highly contentious axing of the Western Force Super Rugby team and the equally divisive sacking of fullback Israel Folau for homophobic social media posts.

Both issues did major damage to the image of rugby union in Australia and Cheika’s fervent desire was that his team’s success would reawaken the passion of fans Down Under for the game.

It was not to be, however, and Saturday’s loss means he will finish his tenure with 34 wins and two draws from 67 tests and Australia seventh in the World Rugby rankings.

“I always back the players to get the job done,” he said.

“I had full trust in them that they would get it done. Didn’t happen, weren’t good enough and that’s the way she rolls.”