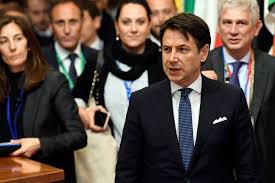 Conte will make clear in a speech in the afternoon that he has no intention of being subjected to any European Union disciplinary procedure over public debt, La Repubblica reported citing several sources.

The European Commission wrote to Italy last week asking for an explanation as to why public debt rose in 2018 instead of falling as required, setting the stage for a possible legal clash with Italy’s eurosceptic coalition.