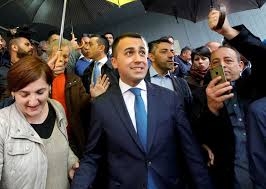 Di Maio got the backing of 80% of the 56,127 5-Star members who voted on the party’s online platform known as Rousseau, the movement said on its blog.

The 32-year-old Di Maio called for the ballot after 5-Star took just 17% of the vote at Sunday’s European election, half the tally of its coalition partner, the right-wing League, triggering internal attacks on his leadership.

The party takes many key decisions in online votes by its members and called the ballot “one of the most beautiful pages in the 5-Star Movement’s history of direct democracy.”

Participation was the highest so far, it said. Members were required to answer yes or no to the simple question: “Do you confirm Luigi Di Maio as the political head of the 5-Star Movement?”

The vote of confidence offers some respite for Di Maio, but he faces a daunting task to turn around the party’s fortunes.

Since Sunday’s election, League leader Matteo Salvini has been acting as if he were already prime minister, promising swingeing tax cuts and calling for changes to European Union budget rules.

Salvini’s strategy appears to be to dictate the policy agenda, knowing that if 5-Star bows to his demands it risks losing more support among its core voters. If it does not, that might trigger a coalition collapse and fresh elections which would be likely to reward Salvini.

The 5-Star Movement has steadily shed support since it won 33% at the March 2018 general election, almost twice as much as its nearest rival, the center-left Democratic Party, and agreed to form a government with the League.

In February, Di Maio promised to re-organize 5-Star at the national and local level, with a structure nearer to that of the traditional parties it has always decried.

He called for new leadership teams and for the scrapping of 5-Star’s long-standing refusal to fight elections in alliance with other parties. He also suggested that for local councillors it was time to revisit an internal rule that no member can hold an elected office for more than two terms.

However, he gave little concrete detail, and these changes will first have to be discussed and approved by 5-Star’s lawmakers and then by its members.