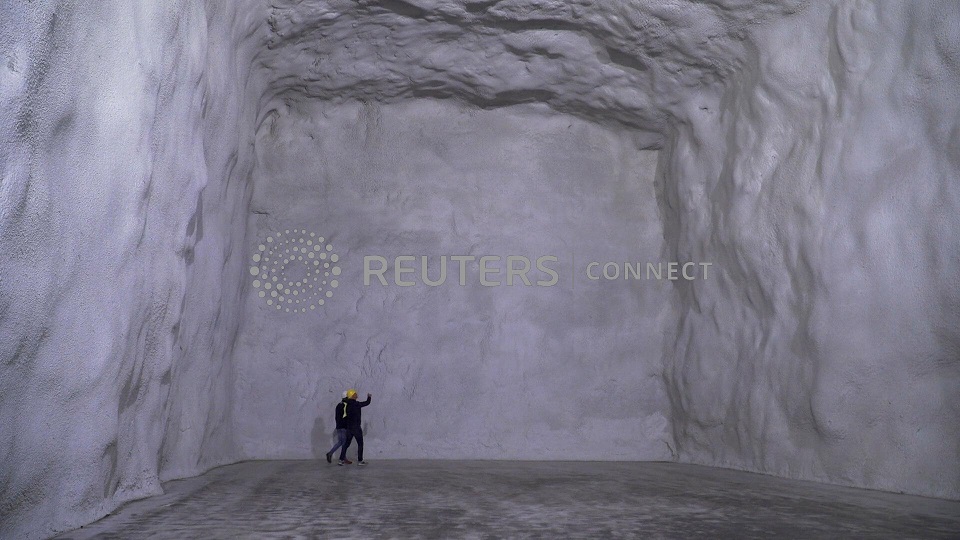 People walk inside a natural refrigerator, carved under the rocks of the Dolomites, where apple producers are storing their harvest in an effort to cut energy bills, in Predaia, Italy, September 13, 2022, in this screengrab taken from a video. REUTERS/Matteo Berlenga

PREDAIA, Italy (Reuters) – Apple farmers in the north of Italy are using natural refrigerators carved under a hillside to store their harvest in a controlled environment that remains at a constant temperature in all seasons.

Three hundred metres beneath their fruit orchards in Predaia, a small town in the Trentino region, the Melinda group has created 34 refrigeration areas in vast caves, where they are able to keep 12-13% of their produce and cut their energy costs.

Inside the refrigerated areas of the caves, the apples are stored in stacked up plastic boxes and moved around by workers in safety helmets operating fork-lift trucks.

“On an environmental impact level, we have seen more advantages and returns,” said Mauro Erlicher, manager of the underground plant.

“One of them is definitely in terms of energy levels, because from a test done last year…we measured a 32% saving of electricity in the cave.”

The caves currently store around 30,000 tonnes of apples, a figure expected to increase to 40,000 tonnes in the near future.

Erlicher explained how large refrigeration storage chambers above ground use a “sandwich panel” insulated with polyurethane and sheets of metal to keep the inside cool.

In the underground caves, the rocks act as the “sandwich panel”, so it is “as natural as possible”

Before the caves can be used, the rocks are cooled with a gas to a depth of 5-7 metres (16.5-23 feet) which means they then maintain a constant temperature of 1 degree Celsius (34 Fahrenheit).

As summer comes to an end above ground, the harvest has begun and farmers are at work picking apples from orchards, which will continue for 30-40 days.

One of the farmers, Loris Calliari, said they were sceptical when they first heard of the cave idea, but were quickly won over by the results.

“We were hesitant at first, then we realised that it works, because there is a good saving of energy, and it is very sustainable. We hope to be able to keep going with our project.”