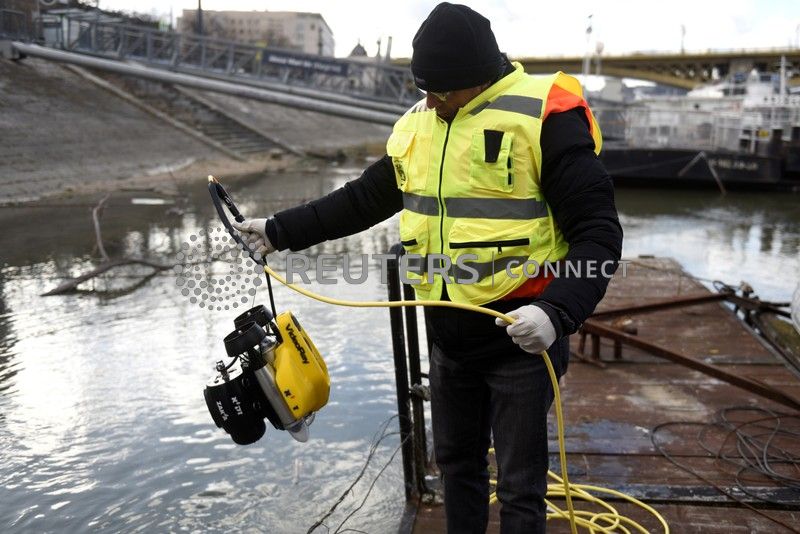 A volunteer of Israeli rescue and recovery organisation ZAKA pulls an underwater sonar from the Danube river during a search for the remains of Holocaust victims murdered on the banks of the river in 1944 in Budapest, Hungary January 15, 2019. REUTERS/Tamas Kaszas

BUDAPEST (Reuters) – An Israel recovery team began mapping out the floor of the Danube in Budapest on Tuesday in search of the remains of Holocaust victims murdered on the riverbank in 1944 and 1945.

Israel’s Holocaust memorial Yad Vashem estimates that 565,000 Hungarian Jews were killed in the Holocaust, the majority of them deported to the Auschwitz death camp between May and July 1944.

In October of that year, when the pro-Nazi Arrow Cross party took power in Hungary, thousands of Jews from Budapest were murdered on the banks of the Danube, according to Yad Vashem.

Israeli Interior Minister Arye Deri said on Monday Hungarian counterpart Sandor Pinter had agreed to his request to provide special equipment to forensic experts from the Israeli volunteer group ZAKA who travelled with him to Budapest.

The Hungarian Interior Ministry has yet to respond to emailed questions seeking comment.

On Tuesday ZAKA divers began scanning the bottom of the Danube with an underwater sonar near a Budapest bridge where some remains were recovered several years ago.

“I think it is a triumph, it is after all these years we come to this work, this holy work on Hungarian ground,” Ilan Berkovich, leader of the ZAKA team, told Reuters.

“For me, I am basically Hungarian, my parents, my grandparents, all my family actually were from here. It is kind of a closure, so emotionally it is amazing, actually.”

ZAKA director Yehuda Meshi-Zahav told Reuters it remained unclear where any remains recovered would be buried. “That has yet to be determined. There is some sensitivity in Hungary about this matter,” he said.

Hungarian Jews have voiced concern at the right-wing nationalism of Prime Minister Viktor Orban, who has praised a Hungarian wartime leader who was an ally of Hitler and used an image of Jewish U.S. financier George Soros in an anti-immigration billboard campaign.

On a visit to Jerusalem last July, Orban said Jews should feel safe under his government. Right-wing Israeli Prime Minister Benjamin Netanyahu, who praised Orban, has found common cause with him on Soros and the U.S. billionaire’s support for critics of their governments’ policies.

More divers are expected in Budapest at the end of February to recover as much as possible of the Holocaust victims’ remains in a mission estimated to cost more than one million euros.

“For us it is very important to give respect for the people who died, even after 70 or something years, and we do the best we can to find as many as we can,” ZAKA diver Ilan Levy said.