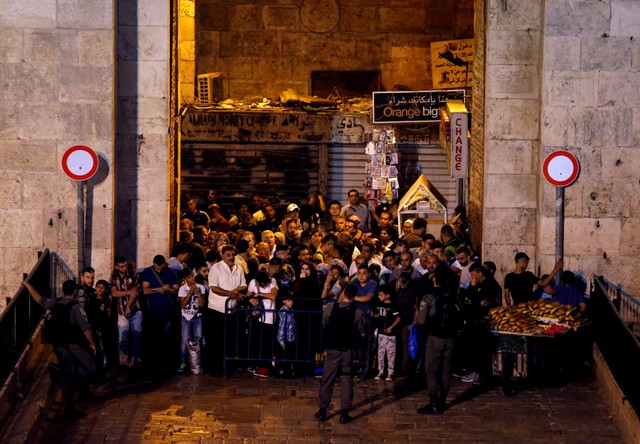 Israeli police secure the entrance to Jerusalem's Old City, near the site of a suspected stabbing attack, September 18, 2018. REUTERS/Ammar Awad

JERUSALEM (Reuters) – A Palestinian man was shot on Tuesday by Israeli police who said he tried to stab a Jewish worshiper near Damascus Gate outside the walled Old City on Yom Kippur, the holiest fast day in the Jewish calendar.

A police spokesman said the attacker had been “neutralised.” Witnesses said police sealed off a street in which a body lay on the ground covered with a sheet.

The spokesman said the assailant was a 26-year-old Palestinian from Qalandia in the Israeli-occupied West Bank, and that his presence in Jerusalem was illegal due to an entry ban on Palestinians during the Jewish High Holy Days.

“Officers identified an assailant who ran towards a Jewish (worshipper) and tried to knock him to the ground. He then continued running towards the policemen while brandishing a sharp object in his hand intending to harm them,” the spokesman said.

Palestinian street attacks against Israelis, many carried out by assailants with no known affiliation to militant groups, have been sporadic since 2015, a year after peace talks collapsed.

On Sunday, a Palestinian fatally stabbed an American-born Jewish settler in the occupied West Bank and was then himself shot and seized by armed civilians who gave chase.