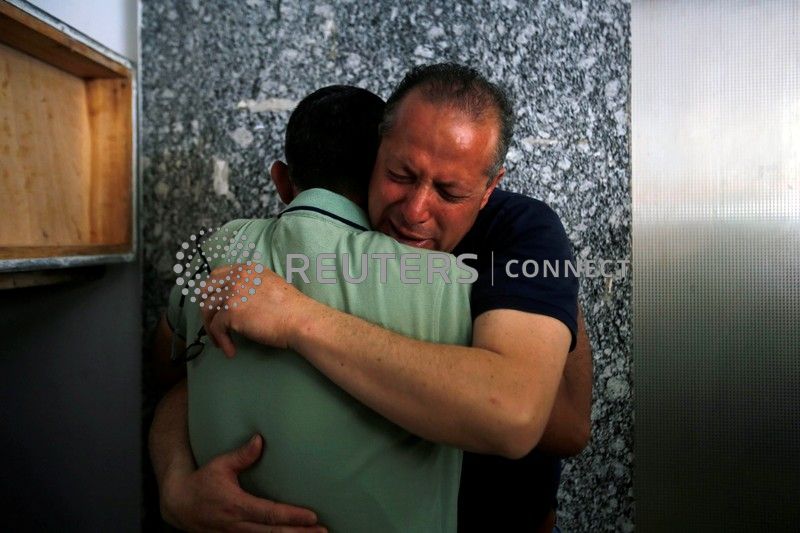 Relatives of Palestinian teenager Abdullah Ghaith hug each other as they react at a hospital in Hebron, in the Israeli-occupied West Bank May 31, 2019. REUTERS/Mussa Qawasma

BETHLEHEM, West Bank (Reuters) – Israeli forces shot and killed a Palestinian teenager who was trying to climb a security fence and cross into Israel from the occupied West Bank on Friday, an Israeli official and Palestinian witnesses said.

Palestinian witnesses told Reuters the 16-year-old had tried to climb the border fence near Bethlehem in the West Bank to visit Jerusalem during the Muslim fasting month of Ramadan.

Palestinian health officials said the teenager died from a gunshot and a 21-year-old was also shot and wounded.

A spokesman for Israel’s border police said that troops had shot a Palestinian who tried to infiltrate into Israel by scaling the fence and the incident was being investigated.

Israel has been on high alert during the month-long Ramadan holiday, particularly after a stabbing attack in Jerusalem early on Friday in which two Israelis were injured and the assailant was killed.

There have been sporadic Palestinian street attacks on Israelis since U.S-brokered peace talks broke down in 2014.

Palestinians say many of the attacks are at least partly born out of frustration at Israeli restrictions. Israel says the attacks are fuelled by incitement and sometimes motivated by assailants’ personal problems.

Palestinians have said access to the holy city through West Bank check points has been relatively open, with all women and men over the age of 40 being allowed in.