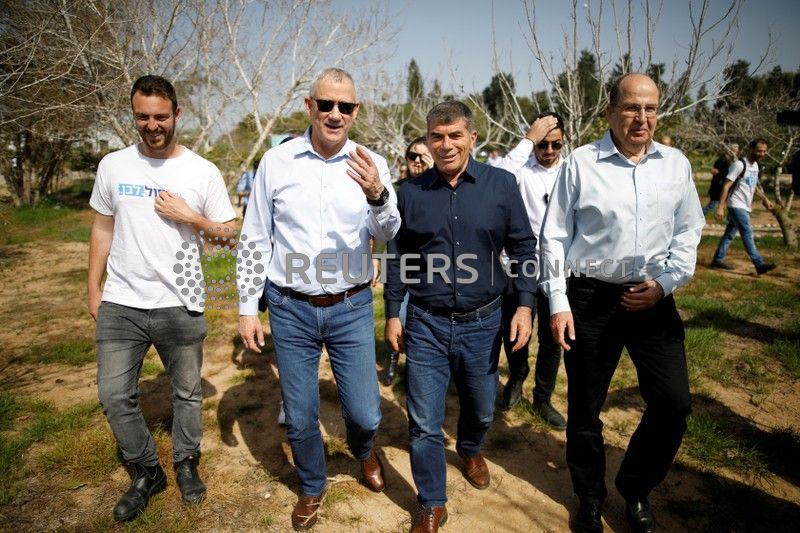 FILE PHOTO: Benny Gantz, head of the Blue and White party, walks with fellow party candidates during a visit to a kibbutz in Israel outside the northern Gaza Strip, March 13, 2019. REUTERS/Amir Cohen/File Photo

Gantz, a former chief of Israel’s armed forces, was informed of the hack five weeks ago, Channel 12 said, adding that the Shin Bet believed Iranian state intelligence had accessed the ex-general’s personal information and correspondences.

Gantz’s centrist Blue and White party, which has outpaced Netanyahu’s conservative Likud in pre-election polls, played down any prospect of a national security breach and suggested the story had been deliberately leaked.

“It should be emphasised that the incident in question happened some four years after Gantz finished his term as (military) chief of staff and the current timing of its publication raises many questions,” Blue and White said in a statement.

A Likud spokesman responded: “We are not involved in this.”

Israel and Iran, arch-enemies, have long been locked in a shadow war. “Iran attacks Israel on a daily basis,” Netanyahu told a cyber-security conference in January.

Netanyahu, who appointed Gantz to his term as top general between 2011 and 2015, has cast his now election rival as a “weak leftist”. Gantz, whose party leadership includes two other former chiefs of staff, has not significantly parted with the prime minister’s policies regarding Iran and other Israeli foes.

Israel and the United States are widely suspected of deploying the Stuxnet malware, uncovered in 2010, and which sabotaged components of Iran’s nuclear programme.