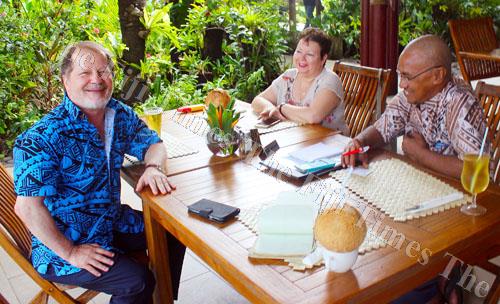 SAMOA is set to benefit from the assistance and support provided by the Israeli Government. Only last week, The Fiji Times reported how the Israeli Government was willing to provide assistance to Fiji and Pacific Island countries at no extra cost. Last month, 12 Pacific Island journalists were invited to Israel and gained firsthand information on how Israel is so advanced in terms of health, agriculture and technology. What was inspiring was that the Benjamin Netanyahu-led Government was willing to share its knowledge and expertise to improve the standard of living, way of life, and provide solutions to the challenges and problems the Pacific face. Samoa is today taking advantage of that assistance. A press statement revealed two of Israeli’s finest will be travelling to Samoa in October to share their wealth of experience and intelligence in water and agricultural technology. The experts from Israeli’s Agency for International Development Cooperation, tagged by the Israeli Government as MASHAV, will partner with the USP Alafua campus to facilitate a two-week course for locals and internationals interested in learning the secrets behind the Jewish nation’s world revered success in the agriculture and water sectors. Israeli’s Ambassador to Samoa Dr Itzhak Gerber, who was in Samoa to facilitate the inaugural meeting, praised the Samoa Government for accepting the initiative by his country. “The credit goes to your prime minister who did not have any reservation in endorsing the training during our meeting earlier this week,” said Dr Itzhak. At the USP Alafua campus brainstorming session was designed for locals to listen and learn from the Israeli experts with the final week dedicated to international participants. “The target was to improve production as well as provide Israeli’s food technologies for sustainability,” he said. With a population of more than seven million, Israel produces 90 per cent of its food. As for the water sector, the ambassador is confident that Israel has a lot to offer. Israel produces one third of its water while 90 per cent of water used, is reused. After meeting with the Samoa Water Authority chief executive, the plan was for the two Israeli experts to conduct a survey in Samoa to identify the country’s water needs and weaknesses. “I feel confident that Israel can assist in a lot of ways to alleviate some of the water problems,” he said. And Dr Gerberg was not boasting when it comes to the experts from MASHAV who will be conducting the training. Since its establishment in 1957, MASHAV has trained close to 270,000 course participants from approximately 130 countries in Israel and abroad and has developed dozens of demonstration projects worldwide. Today, it is a shining example and a worldwide pride of Israeli’s genius. Samoa is not the only country benefiting from Israel, but Fiji also. A good number of Fijians are set to benefit from Agriculture training through MASHAV. The Fijians are set to travel to Israel for an 11-month course in the land many Christians refer to as the Promised Land. The students will not only study but also work on farms getting the best training and assistance, in the classroom and out in the field, from among the very best in Israel.