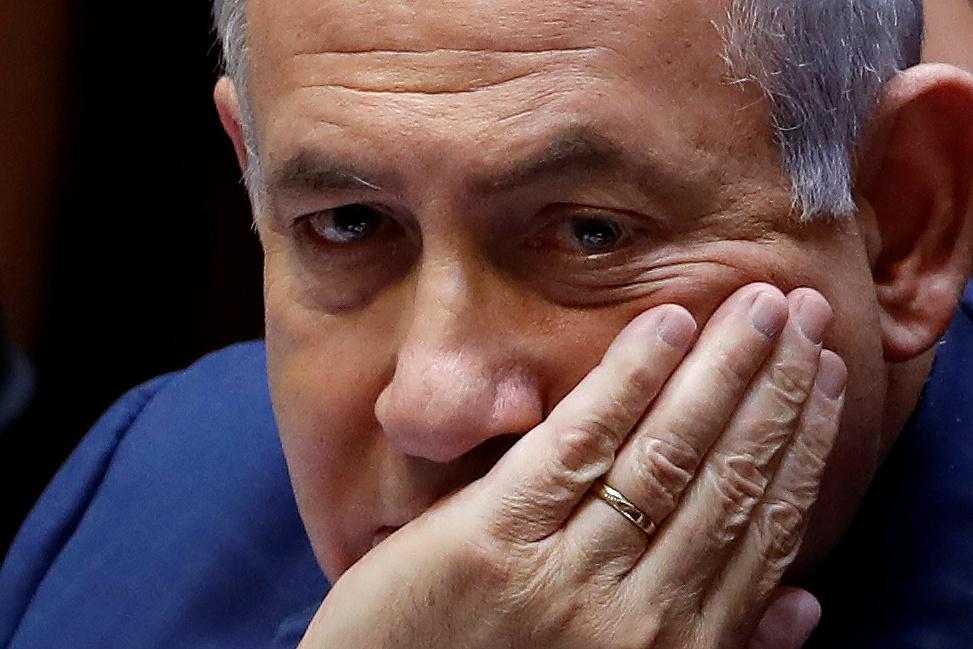 Israeli Prime Minister Benjamin Netanyahu sits at the plenum at the Knesset, Israel's parliament, in Jerusalem May 30, 2019. REUTERS/Ronen Zvulun

JERUSALEM (Reuters) – Israeli lawmakers voted to dissolve parliament on Thursday, paving the way for a new election after veteran Prime Minister Benjamin Netanyahu failed to form a government before a midnight deadline.

Netanyahu preferred a new ballot, set for Sept. 17, to the alternative, under which President Reuven Rivlin could have asked another politician to try and form a ruling coalition.

But the need to go to the polls again so soon after a closely contested April 9 election in which Netanyahu had claimed victory, showed a new weakness in a leader who has been in power for the past decade and who has become the face of Israel for many.

Potential indictments in three corruption cases have only deepened questions about his political survival.

“We will win,” Netanyahu, 69, head of the right-wing Likud party, vowed after parliament voted when the deadline expired for him to assemble his fifth government.

However, he was looking over his shoulder at the Likud benches during the vote in what some commentators interpreted as concern about any last-minute revolt. Not a single Likud lawmaker wavered in voting for an election.

With coalition-building potentially stretching into November once that election is over, the uncertainty seems likely to delay further U.S. President Donald Trump’s forthcoming plan to resolve the Israeli-Palestinian conflict.

At the White House, Trump voiced regret at the turmoil in Israel and praised Netanyahu, with whom he has been in lockstep in a tough stance on the Palestinians and Iran.

Those parties want young religious scholars exempted en masse from mandatory national service. But Lieberman and many other Israelis say they should share the burden.

Faced with the prospect of having to step aside at the end of a 42-day post-election period allowed for putting together a government, Netanyahu instead mustered support to dissolve the Knesset.

He cast Lieberman, a settler in the occupied West Bank, as a leftist for effectively blocking the creation of a right-wing administration and said his erstwhile ally was out to topple him.

“Lieberman is power-drunk, driven by whims and personal ambition,” Netanyahu said in a televised statement.

In a dig that foreshadowed election campaign attack lines, Lieberman retorted that he lives in a settlement, whereas Netanyahu has a home in a beachfront suburb.

“The man from Caesarea is accusing the man from Nokdim of being left-wing?” said Lieberman, head of the Yisrael Beitenu party.

An election poll by Channel 13 TV News showed both men’s parties gaining strength in the fallout. But it also showed that Netanyahu would be unable to form a right-wing government without Lieberman.

As the coalition deadline neared, public attention had been focused on pledges by Netanyahu loyalists to push for a vote in the Knesset granting him parliamentary immunity from criminal prosecution and to pass a law ensuring such protection cannot be stripped by the Supreme Court.

Many opponents and political commentators saw Netanyahu’s push for a new election, before the poll in April and now, as being motivated by his legal woes.

“It’s astounding how easily one man is taking the entire State of Israel hostage for his own personal gains. We are heading to another election just so that he can escape prosecution,” Gabi Ashkenazi, a member of the centrist Blue and White party and former armed forces head, told Army Radio.

Dubbed “crime minister” by foes, Netanyahu denies any wrongdoing in the graft investigations he faces, and has said he aims only to ensure the Supreme Court does not overstep in judging decisions by popularly elected lawmakers.

Israel’s attorney general has said he intends to charge Netanyahu with bribery and fraud, pending a pre-trial hearing, set for October.

The last election, in which Netanyahu showcased his warm relations with Trump and frequent contacts with Russian President Vladimir Putin, ended with him neck-and-neck with Benny Gantz, a politically untested ex-armed forces chief and head of Blue and White.

But Netanyahu was given the nod to form a government after ultranationalist, right-wing and religious party leaders voiced their support.