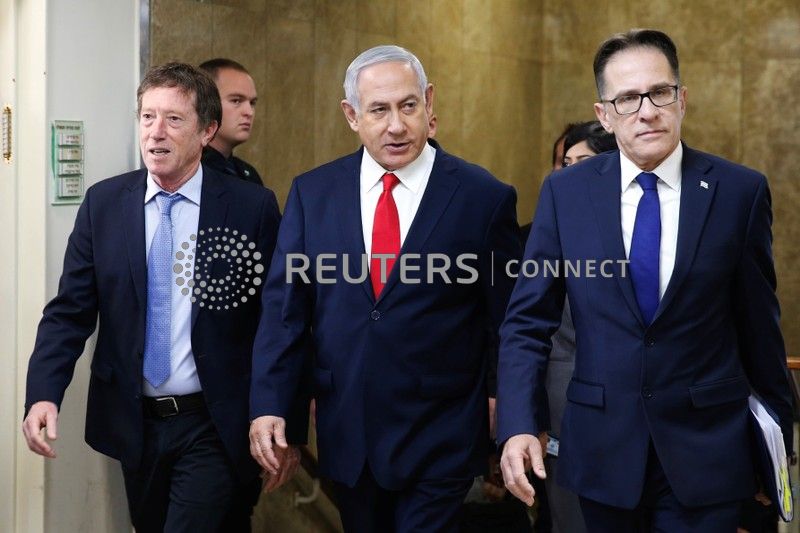 JERUSALEM (Reuters) – Israel acknowledged on Sunday that it carried out a weekend air strike on what it called an Iranian arms cache in Syria, and that it also completed a hunt for cross-border tunnels dug by Tehran-allied Lebanese Hezbollah guerrillas.

Long wary of publicity around its operations against Iran-linked targets on its northern front, Israel has been lifting the veil in recent days – a sign of confidence in a campaign waged amid occasional tension with Syria’s big-power backer, Russia.

Prime Minister Benjamin Netanyahu may also be playing up his security credentials as he seeks re-election on April 9.

“We have been taking action with impressive success to arrest Iran’s military entrenchment in Syria,” Netanyahu told his cabinet in televised remarks, saying this entailed “hundreds” of attacks over the past several years of Syria’s civil war, in which Iranian and Hezbollah forces have backed the Damascus government against rebels and Islamist insurgents.

“In just the last 36 hours, the air force struck Iran’s warehouses, containing Iranian arms, in Damascus international airport,” he added, referring to a Friday night sortie that Syria said it had answered with anti-aircraft fire.

Syrian state media said at the time of the attack that the damage was limited to a hit on a warehouse at Damascus airport.

Netanyahu also cited an Israeli search-and-dismantle mission against suspected Hezbollah attack tunnels along the border with Lebanon that was launched in December and deemed completed on Sunday.

The Israeli military said a sixth tunnel was found on Saturday, 55 metres (yards) deep and reaching “a few tens of metres” into Israeli territory from 800 metres within Lebanon.

“According to our assessments, there are no longer any tunnels crossing into Israel,” military spokesman Lieutenant-Colonel Jonathan Conricus said. He added that Hezbollah retained underground facilities on the Lebanese side.

Hezbollah has not commented on the tunnels, the existence of several of which was confirmed by U.N. peacekeepers in Lebanon.

Hezbollah and Israel last fought a war in 2006. While they have at times traded blows within Syria and the Israeli-occupied Golan Heights, the Israel-Lebanon border has mostly been quiet.

Citing intelligence assessments, Israel’s outgoing armed forces chief, Lieutenant-General Gadi Eizenkot, told a local TV station on Saturday that the tunnels were prepared in secret, over a period of years. He said this was part of a Hezbollah plan to send as many as 1,500 fighters to infiltrate Israeli border communities during any future war.