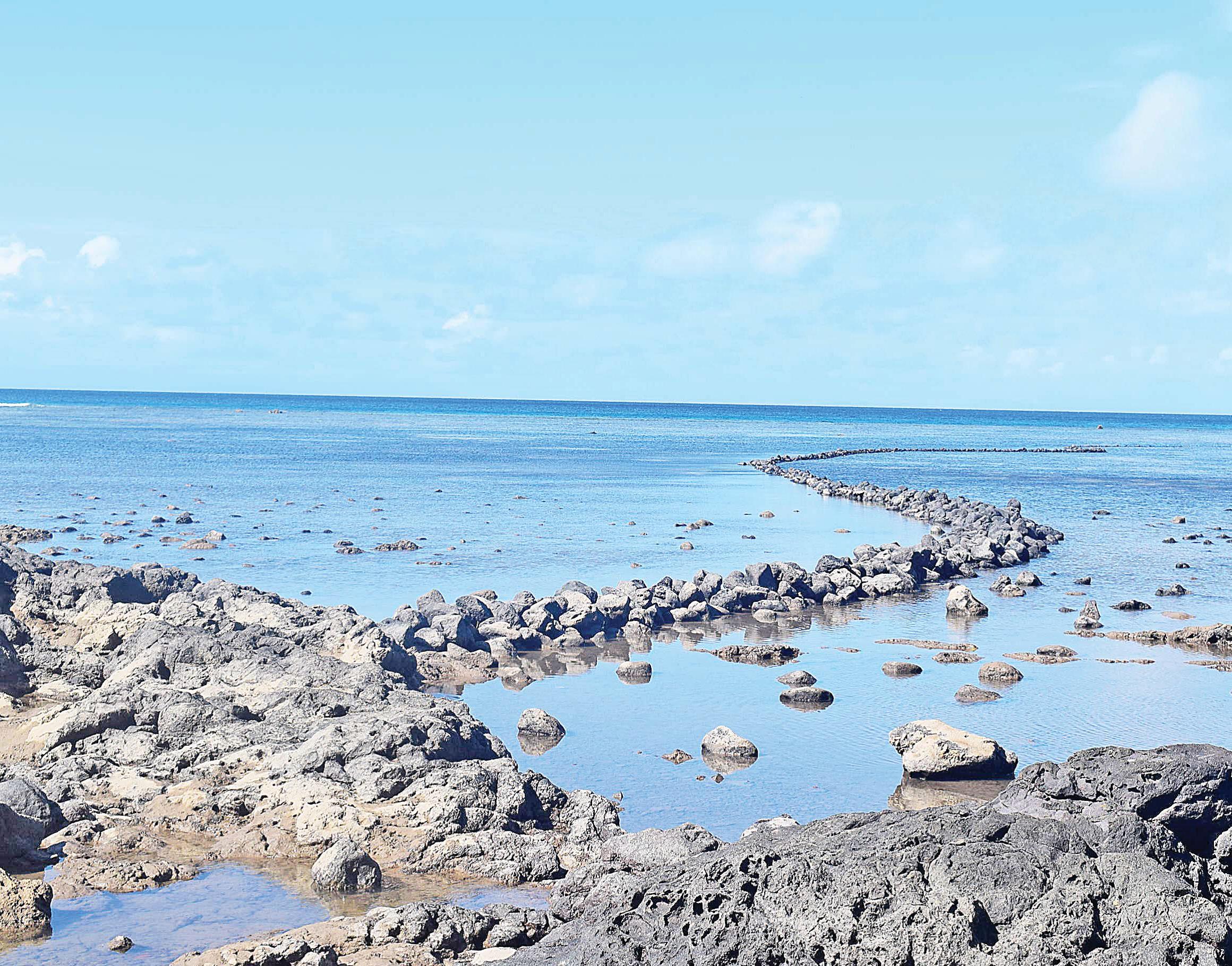 THE people of Vatulele Village on Koro have many stories to tell the attentive listener about how the monster storm, Winston, caused death and destruction on the island in February 2016.

But if you are lucky enough, you might also hear from a handful of elders and some young people too, the old story behind the village’s three moka constructed on its shoreline, and their connection to the vu or deity called Leka.

Vatulele is a village that sprawls out over a hilly terrain on Koro Island’s northern tip.

It is well known for its abundance of fruits and fun-loving people. The series of moka, which have been in place for generations, can be seen if one walks eastwards along the village shoreline.

Minutely ruffled, the structure was spared by Winston’s wrath and today stands as a reminder of the past and the existence of traditional i-Taukei social hierarchy.

A moka is a traditional stone enclosure heaped together as part of a fish trap.

The circular enclosure is filled up during high tide and traps fish within it when the tides goes out.

To allow fish into the stone fence, it has a mouth, which is sealed off during fish drives.

While no villager knows the exact time the three moka were constructed, those interviewed agreed erecting the structure involved the entire vanua.

“I remember dressing up for the occasion, which was full of fun fare and laughter. It was almost like having a celebration. People were laughing and singing all throughout.”

Some aspects of tuva moka, the act of constructing the stone fence, contain incidents that defy logic, which ordinary readers may find rather stupefying.

Telling it should not be taken as an attempt to mock current Christian dogmas but share a story based on people’s recollections of what was passed down to them orally.

The story also shows the close relationship villagers have with their spirit God of old and nature. In fact, similar stories are still culturally accepted within the vanua context today and some exemplify people’s traditions, culture and beliefs.

Take for instance the people of Cakaudrove, who supposedly have close relationships with sharks. In the province, these ferocious carnivores are revered and protected.

According to The Fiji Times of June 1, 1985, during a trip to Conway Reef, on Fiji’s most south-west boundary with New Caledonia, the naval vessel HMS Kikau under the command of then Captain Frank Bainimarama, was with the former president and high chief of Cakaudrove the late Ratu Sir Penaia Ganilau on board, when it was caught in a freak storm.

Around the same time, a curious 10-metre shark was spotted shadowing the troubled vessel for a good part of the morning.

Joeli Vaiteyaki in a paper titled, Fisheries Resource-use Culture in Fiji and its Implications, talked about a similar incident, where a huge fish was spotted at the Suva Wharf before the Royal yacht Britannia berthed in 1982.

The fish only swam away after Ratu Sir Penaia arrived and communicated with it, Mr Veitayaki quoted the The Sunday Times of 31 October 1982 as saying.

Vatulele is located on the northern part of Koro, between the villages of Nabuna and Nacamaki.

While it is not clearly known where inhabitants originated from, a few elders infer there could be a close and explanative relationship between villagers and those from the island of Vatulele, in the province of Nadroga/Navosa.

Traditionally, a yavusa and its size varied greatly from one to the next.

However, generally each village would contain two or three.

Some yavusa are larger and may occupy a whole village.

Others, larger still, may occupy a number of different villages, possibly sharing some of these with other yavusa.

Each yavusa comprises a number of lesser branches known as mataqali.

According to one historical account, the founder of a yavusa was regarded or exalted to the rank of God after death, and was worshipped by his descendants.

A “burekalou” or temple was erected as his shrine and he was believed to inhabit the body of some living creature which was then regarded “Tabu” to all the tribe.

These were varied – sharks, eels, rats, snakes, hawks and kingfi shers are some common ones.

These totems are similar to those belonging to Vatulele islanders, providing some light on the probable relationship between the two places.

Once the vanua of Bucabuca decides on a date to construct the moka, the four mataqali are required to make all the necessary preparations.

Two mataqali including Namolisawana remain on land and prepare a feast for the other two mataqali that take part constructing the moka and collecting Fiji.

“I remember the event as one where there was division of labour. It was done by the whole vanua and each mataqali had a role to play. It was about unity and working together,” said Josaia Tuinisautu.

The chiefly mataqali of Namolisawana and by tradition, are responsible for piling up moka stones and catching fish while and remain on land and prepare food for those who take part in the fish drive.

The chiefly mataqali of Namolisawana and by tradition, are responsible for piling up moka stones and catching fish while and remain on land and prepare food for those who take part in the fish drive.

“The moka are constructed without a break and may go into the night and during high tide,” Ditutu said, “we only stop constructing when the mouths of the three fish fences are sealed off.”

“Once this is done, the first fish caught is placed on a rocky platform called the vatu ni Leka as sevu. Someone then climbs a coconut tree and picks a green coconut or bu. This is placed together with the fish and offered to Leka.”

“I was told in the olden days, the breaking of raw fish bones could be heard as soon as Leka was given food. People would also hear him drinking the bu greedily which showed he was happy.”

Today, as a result of TC Winston, Leka’s sacred rock is covered by a mangrove overgrowth.

Vili Rameke, said food offerings were given to appease Leka, who held authority over the qoliqoli and adjacent coastline where he lived.

“If Leka is happy with the offerings of fish and bu, we will have a good catch and everyone will rejoice knowing there’ll be a lot of fish to go around and we’ll have lots to eat,” Rameke said.

“From what I’ve heard, as soon as people return from offering food to Leka, they will hear him gnawing at the fish and making slurping sounds while drinking coconut water. When this happens we know it’s a good sign. It shows he appreciates the food and will bless our catch,” Ms Ditutu said.

After Leka finishes his food, the fish drive continues.

The traditional events conclude with merrymaking and feasting on the beachfront adjacent to Leka’s platform.

Apart from culture and traditions, Vatulele’s moka, as well as other traditional fishing methods, also demonstrate the sustainable nature of indigenous fishing practices and the symbiotic relationship i-Taukei have with their natural resources and traditional deities.

Like the traditional practice of tuva moka, the performance of the yavirau requires sound social relationships and simultaneously restrengthens these.
“The traditional culture of fishery resource use is important to the sustainable utilisation of fishery resources in the future and should be taken into consideration when fishery developments are being planned. It is important to involve local communities in sustainable fishery development and
to convince them through the use of good education programmes,” Veitayaki said.

“Fijians need to use culture to draw up effective methods for contemporary resource use to protect the resource base. Fishery resources are important to the people and should be utilised in a manner that enables the people to enjoy the use of these resources now and in the future.” Scabies-
Covered Warrior

History being the subject it is, a group’s version of events may not be the same as that held by another group.When publishing one account, it is not our intention to cause division or to disrespect other oral traditions. Those with a different version can contact us so we can publish your account of history too – Editor