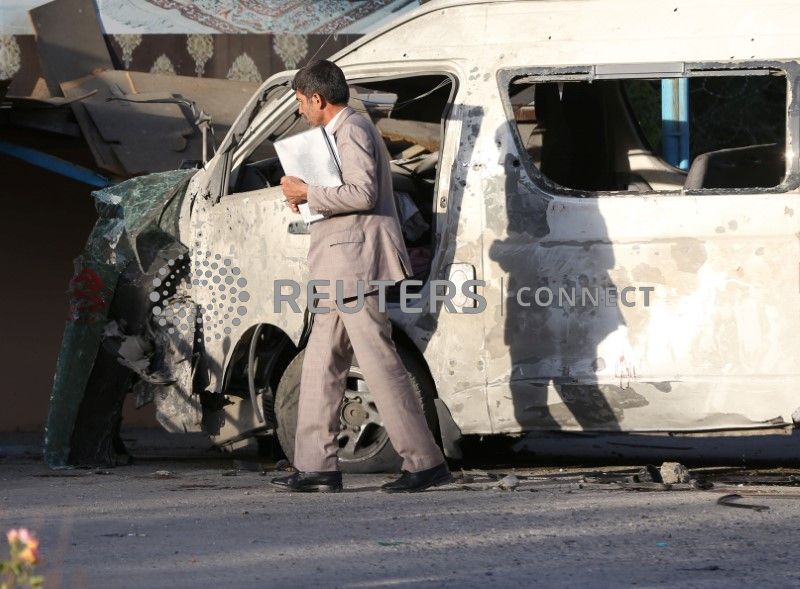 An Afghan official inspects the wreckage of a bus which carried employees of an Afghan television station and was bombed, in Kabul, Afghanistan May 30, 2020. REUTERS/Omar Sobhani

KABUL (Reuters) – Islamic State claimed responsibility for Saturday’s bomb explosion that killed an Afghan journalist and a technician in minibus carrying employees of a local television station in Kabul.

At least seven people were wounded in the evening rush hour attack. Pictures showed a white minibus with extensive damage to its front.

“Our colleagues Mir Wahed Shah, an economic reporter, and Shafiq Amiri, an employee in the technical department, were martyred in the incident,” said Mohammad Rafi Rafiq Sediqi, chief executive of the Khurshid TV station.

The United States, European Union and NATO condemned the attack. Last year, two employees of Khurshid TV were killed and two wounded in a similar attack.

Islamic State, which battles government forces and Taliban militants, has claimed some of the deadliest attacks in urban Afghanistan in recent years. It did not give a reason for Saturday’s blast.

Taliban and other Islamist insurgents have repeatedly targeted Afghan journalists, killing 15 in 2018, the deadliest year yet for the Afghan media, according to the media freedom group Reporters Without Borders.

The Taliban, who were ousted from power by U.S.-led forces in 2001, said Tolo was producing propaganda for the U.S. military and Western-backed Afghan government.