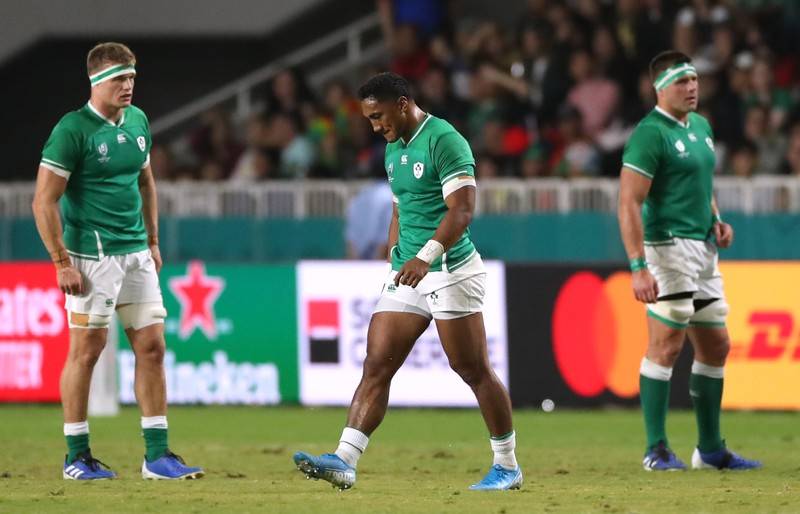 FUKUOKA, Japan (Reuters) – Ireland coach Joe Schmidt said Bundee Aki was shattered that his Rugby World Cup could be over as he defended the centre’s tackle that drew a red card in the 47-5 win over Samoa on Saturday.

Aki was sent off in the 29th minute after a high tackle at Fukuoka Hakatanomori Stadium and faces a multiple-game suspension, souring the emphatic victory that put Ireland through to the quarter-finals.

“I think Bundee is upright (in the tackle), you can see both his hands behind the shoulder blades of the player who’s just starting to come up and it’s all split-second stuff,” New Zealander Schmidt told reporters.

“So we live in hope and we’ll see what the judiciary decide.

“But once it’s a red card you sense a loss of control over what happens next, no matter what you try to present.

“We know there’s a really hard line. I certainly feel for Bundee, he’s pretty devastated that any further participation in the tournament is now at risk.”

With Aki having Samoan heritage, the night was supposed to be special for the New Zealand-born centre as he mixed with friends on the Samoa team.

Samoa were almost as distraught as the Irish over Aki’s red card and coach Steve Jackson said they would willingly make representations to help the 29-year-old escape further sanction.

“As (Samoa captain) Jack (Lam) said, I hope no further sanction goes on,” said Jackson, who lost two players to red cards through the course of the tournament.

“Hopefully the powers that be see some sense and he gets to continue on in the tournament because he’s a great kid.”

Although down to 14 men early in the match, Ireland responded well and ended up running in seven tries as Samoa crumbled with indiscipline and shoddy defence.

Schmidt said he was pleased with how Ireland managed to starve the Samoans of possession and controlled the game by playing to their strengths in the scrum and the maul.

They will face champions New Zealand or South Africa in the quarter-finals, depending on the outcome of the Scotland-Japan game on Sunday which may yet be cancelled due to Typhoon Hagibis.

“The second half probably wasn’t great to watch but it was comforting to know we were in the right side of the pitch,” said Schmidt.

“I felt that tactically we were relatively solid once we lost Bundee.”