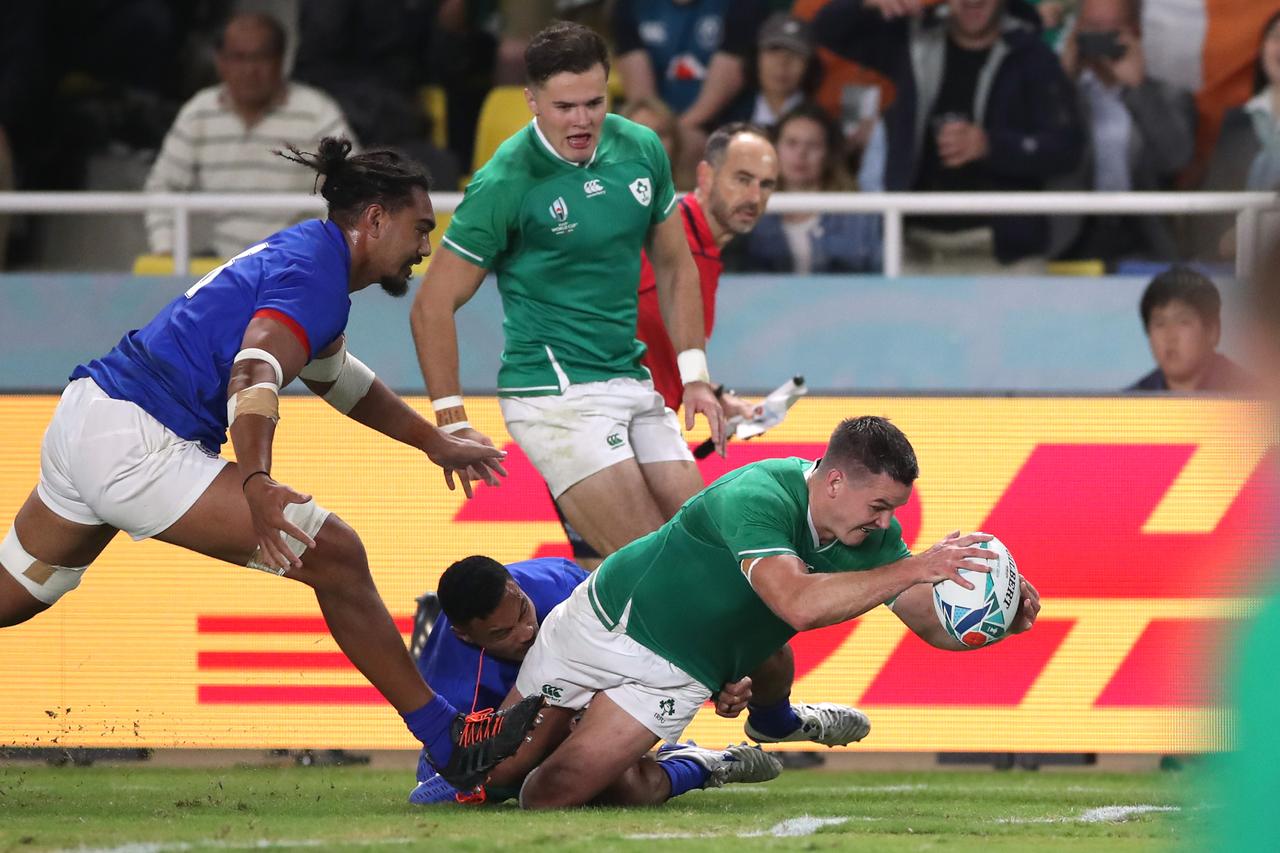 FUKUOKA, Japan (Reuters) – Ireland played with 14 men for 50 minutes but still eased into the Rugby World Cup quarter-finals with a seven-try 47-5 demolition of ragged Samoa in their final Pool A match on Saturday.

Centre Bundee Aki became the seventh player to be shown a red card at the tournament when he went for a high tackle on Samoa flyhalf Ulupano Seuteni in the 29th minute at Fukuoka Hakatanomori Stadium but Ireland were 21-5 up by that stage.

Flyhalf Johnny Sexton grabbed a brace of tries, earning the bonus point that secured their passage to the last eight with his second just before halftime.

“After the Japan game we knew that 10 points would do us and we’ve done that over the last two games,” said Best.

“I think it shows a bit about the character of a side when you go a man down.

“We’re in the quarter-finals and whatever happens tomorrow happens.”

Fukuoka escaped the violent storm that forced the cancellation of Saturday’s other two matches but Typhoon Hagibis could still prevent Japan playing Scotland on Sunday to decide if Ireland next face the champion All Blacks or South Africa.

Already-eliminated Samoa drew two yellow cards in the match and bowed out from a largely disappointing and undisciplined campaign with a solitary win over Russia in four pool games.

“It was pretty tough, very tiring, they really took it to us,” said Samoa skipper Jack Lam, his team’s sole try-scorer.

“It’s been a very tough two weeks but we can still hold our heads high.”

Having lost to Japan and laboured to victory over Russia after a dominant opening win over Scotland, Ireland needed to make a statement and started with a near-full strength side, boosted by centre Robbie Henshaw’s return from a hamstring strain.

The unstable state of the pitch was a talking point in the lead-up and despite the attentions of a team of ground staff, it was badly chopped up by halftime.

Samoa’s defence was as ragged as the playing surface and it crumbled against the first Irish shove from a lineout drive, with Best touching down from the back of a maul in the fourth minute.

Two minutes later, Samoa were down to 14 men with hooker Seilala Lam drawing a yellow card for a high tackle on Jacob Stockdale.

Ireland wasted no time in stretching their opponents, with quick hands finding battering ram Furlong, who planted the ball over the line after bursting through four defenders.

By the start of the second quarter, Ireland were 21-0 up, with jet-heeled winger Larmour setting up Sexton’s first try with a brilliant linebreak and inside pass near the right corner.

It took a loose Irish pass and intercept for Samoa to get their first points, with captain Lam completing a furious drive over the line.

The game then threatened to turn Samoa’s way when Aki was sent off by referee Nic Berry.

But Ireland responded brilliantly, pushing the Samoans back over the gain-line and soon winning a penalty scrum at the five-metre line.

Murray whisked the ball wide to his halfback partner and Sexton easily split two defenders to claim the bonus point try near the left corner a minute before the break.

Aki’s absence was barely noted after the re-start as Ireland starved the Samoans of possession and rumbled forward.

Lethal behind the scrum, Murray found Larmour at the right corner with a cut-out pass and the young fullback’s converted try blew the lead out to 33-5.

Ireland’s forwards maintained the pressure and Samoa soon had a second man off, with TJ Ioane drawing yellow near the hour-mark for a ruck infringement.

With team numbers back to parity, Samoa were soon pinned on their goal-line, with number eight CJ Stander eventually crashing over for Ireland’s sixth try.

The game descended into an exhibition, as replacement flyhalf Joey Carbery threaded a grubber kick through the Samoan line, allowing Conway to dot down 10 minutes from the siren to spark a chorus of singing by Irish fans.