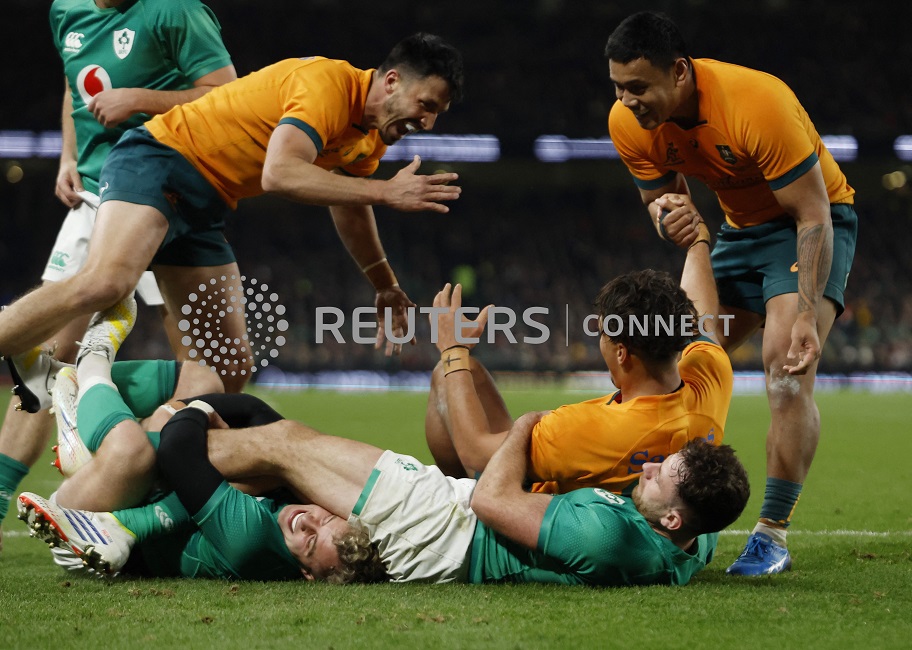 DUBLIN (Reuters) -A late Ross Byrne penalty handed Ireland a 13-10 win over Australia in a scrappy test on Saturday, weathering the late withdrawal of captain Johnny Sexton to complete a 2022 hat-trick of victories against the three Southern Hemisphere heavyweights.

Jack Crowley, Ireland’s third choice flyhalf who made his debut off the bench against Fiji a week ago having only begun his professional career last year, notched the only points of a stop-start first half that set the tone for the entire game.

A try finally arrived on 66 minutes through Bundee Aki and after Jordan Petaia cancelled it out almost immediately, Byrne’s brilliant, long range penalty made it a record equalling if not pretty 12th successive home victory for Ireland.

“That’s what all good side’s do, you always find a way,” Ireland coach Andy Farrell told a news conference.

Sexton’s absence was felt from the off and Australia could have further quietened a stunned Aviva Stadium but they had a fourth minute try chalked off for conceding the kind of “dumb” penalty coach Dave Rennie had warned against after last week’s shock loss to Italy.

They settled down as Ireland’s penalty count instead ticked up but despite their superior possession, the visitors could not breach an impenetrable Irish defence that had stood up so well in their victory over South Africa two weeks ago.

However, Ireland were struggling in attack, mostly box kicking or keeping the ball tight up front rather than put too much pressure on Crowley, who only made his Munster debut last year and has played just 19 times for the province.

It highlighted just how dependent they are on Sexton, who will be 38 by the time Farrell’s men head to France next year in search of an elusive World Cup breakthrough.

They failed to take advantage when the Wallabies went down to 14 men – and briefly 13 – either side of halftime after replacement hooker Folau Fainga’a was the third Australian player to be penalised for a neck roll.

The second half was a similarly poor spectacle and it took 56 minutes for Bernard Foley to grab the second score of the game for an Australian side who suffered a number of injuries and were ultimately unlucky not to come away with more.

Ireland’s lineout was as near untouchable as usual and it provided the platform for Aki to mark his return from an eight-week suspension by barrelling over the line.

It took just three minutes for Australia to strike back, with Will Skelton doing the damage up front to allow another replacement, Petaia, to take advantage of a big overlap. Foley landed the difficult conversion to make it 10-10.

It then fell to Byrne, Ireland’s forgotten man at 10 who was only added to the squad this week, to land the equally difficult and critical kick three minutes from time.

“We played a lot of good footy with not a lot of reward. Frustrating, it was very winnable,” Rennie said.