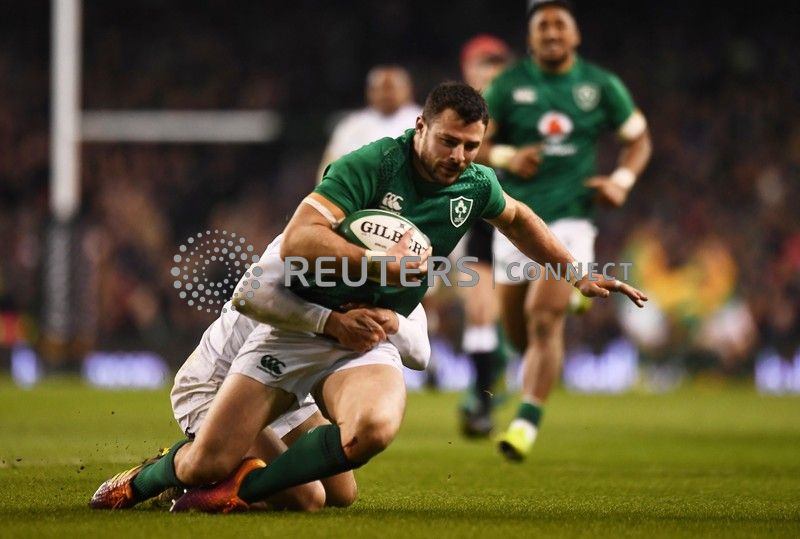 FUKUOKA, Japan (Reuters) – Centre Robbie Henshaw will make his first appearance for Ireland at the World Cup in Japan as he takes his place for the crunch Pool A clash against Samoa on Saturday.

Henshaw missed Ireland’s matches against Scotland, Japan and Russia as he recovered from a hamstring strain but will start in the number 13 jersey outside Bundee Aki in one of 11 changes to the starting side that beat the Russians 35-0 in Kobe.

Tadhg Beirne, who moves to the back row, Jonny Sexton, Aki and Keith Earls, who switches wings, are the only players to retain their places.

Joe Schmidt’s team are seeking the bonus-point victory in Fukuoka that would ensure a place in the quarter-finals.

Ireland are second in the group on 11 points behind Japan (14 points), whose match against Scotland (10) in Yokohama on Sunday has been thrown into doubt due to Typhoon Hagibis.

Tournament regulations state that cancelled games are ruled a 0-0 draw, with two points going to each team.

If Scotland’s game is cancelled they would move on to 12 points, meaning Ireland would need to pick up at least a losing bonus point from the Samoa game to be assured of a place in the last eight along with Japan.

Ireland beat Scotland in their pool opener, giving them the head-to-head edge.

“For us, business as usual,” Schmidt told reporters at the team hotel in Fukuoka on Thursday.

“We can’t really control what happens with the Scotland-Japan game. So, on Saturday evening we need to get our business done as best as we can.”

Hooker Rory Best will start and take back the captaincy from flyhalf Johnny Sexton, with scrumhalf Conor Murray also promoted from the bench to face the already eliminated Samoans, who were beaten 38-19 by Japan in their last pool clash.

Jordan Larmour will start at fullback as Rob Kearney recovers from a groin strain suffered against Russia, with Keith Earls and Jacob Stockdale completing the back three that started the 27-3 win over Scotland.

Schmidt said the typhoon had proved an unwelcome distraction for his team after training on Thursday, as players discussed the various scenarios that could arise.

Final round pool matches between France and England, and New Zealand and Italy, have been cancelled for safety reasons, resulting in the elimination of the Italians. [nL3N26V205]

“So when we get down to the captain’s run tomorrow we will hopefully be on task,” Schmidt said.

“Once you actually get to the ground and you know the immediacy of a match, it tends to focus the mind.”