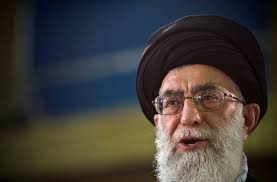 LONDON (Reuters) – Iran will not negotiate over its nuclear and missile programs with the United States, Supreme Leader Ayatollah Ali Khamenei said on Wednesday, after President Hassan Rouhani signaled talks with Washington might be possible if sanctions were lifted.

Khamenei was quoted as saying on his website: “We said before that we will not negotiate with America, because negotiation has no benefit and carries harm.”