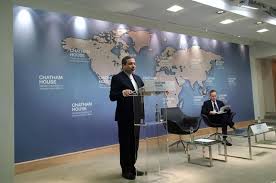 DUBAI (Reuters) – Iran said on Sunday it would not back down from its decision to scale back some of its commitments under 2015 nuclear deal with major powers, state TV quoted Iran’s Deputy Foreign Minister Abbas Araqchi as saying.

“The European signatories of the deal lack the will to save the deal. Our decision to decrease our commitment to the deal is a national decision and it is irreversible as long as our demands are not met,” Araqchi said after meeting the British minister for the Middle East in Tehran.