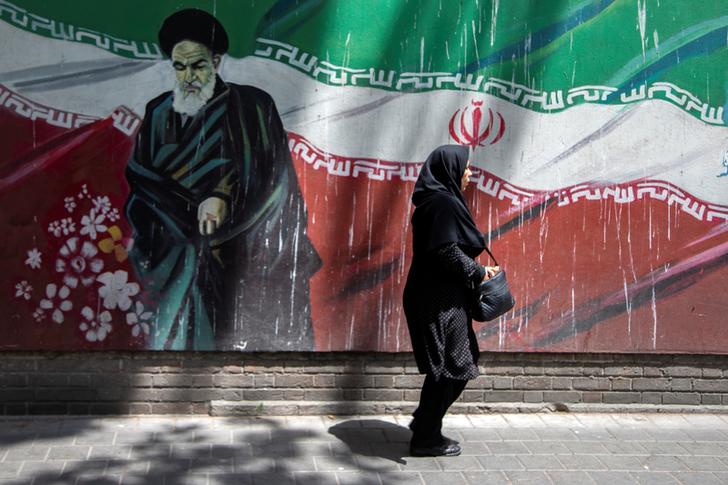 An Iranian woman walks in front of a mural of Iran's late leader Ayatollah Ruhollah Khomeini in Tehran, Iran July 7, 2019. Nazanin Tabatabaee/WANA (West Asia News Agency) via REUTERS. ATTENTION EDITORS - THIS IMAGE HAS BEEN SUPPLIED BY A THIRD PARTY.

DUBAI (Reuters) – Iran said on Sunday it will shortly boost its uranium enrichment above a cap set by a landmark 2015 nuclear deal, prompting a warning ‘to be careful’ from U.S. President Donald Trump, who has pressured Tehran to renegotiate the pact.

In a sign of heightening tensions, France, Germany and Britain – all parties to the deal – expressed concerns over the step taken by Tehran, its latest effort to force the West to lift sanctions ravaging its limping economy.

In a live news conference, senior Iranian officials threatened further violations, saying Tehran would keep reducing its commitments every 60 days unless European parties to the agreement protected it from sanctions imposed by Trump.

“We are fully prepared to enrich uranium at any level and with any amount,” said Behrouz Kamalvandi, spokesman for Iran’s Atomic Energy Organisation.

“In a few hours the technical process will come to an end and the enrichment beyond 3.67% will begin,” he added, referring to the limit set in the 2015 agreement.

Speaking to reporters as he departed Morristown, New Jersey, Trump warned Tehran. “Iran better be careful. If you enrich for one reason and I won’t tell you what that reason is but it’s no good. They’d better be careful,” he said.

Iran is ‘doing a lot of bad things’, Trump said but did not elaborate. “The way they want it, they would have automatic rights to have nuclear weapons. Iran will never have a nuclear weapon,” he added.

Israeli Prime Minister Benjamin Netanyahu said the step was extremely dangerous and was designed to create atomic bombs, and again called on Europe to impose punitive sanctions on Tehran.