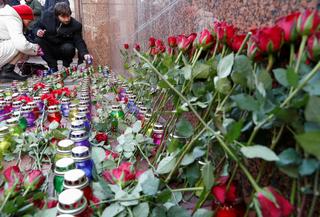 DUBAI (Reuters) – Iran’s Civil Aviation Organisation blamed a misalignment of a radar system and lack of communication between the air defence operator and his commanders for the accidental downing of a Ukrainian passenger plane in January that killed 176 people aboard.

Iran’s Revolutionary Guards shot down the Ukraine International Airlines flight with a ground-to-air missile on Jan. 8 shortly after the plane took off from Tehran,in what Tehran later acknowledged as a “disastrous mistake” by forces who were on high alert during a confrontation with the United States.

“A mistake in aligning the radar system had caused human error. An operator had forgotten to re-adjust the direction on the radar system after moving to a new position, an error that contributed to misreading the radar’s data,” an interim report on the Civil Aviation Organisation (CAO) website said.

The CAO report, which was published on late Saturday, said the missile battery that targeted the passenger plane had been relocated and “was not properly reoriented”.

The downing occurred at a time of high tension between longtime foes Iran and the United States. Iran was on alert for attacks after it fired missiles at Iraqi bases housing U.S. forces in retaliation for the killing on Jan. 3 of its most powerful military commander, Qassem Soleimani, in a U.S. missile strike at Baghdad airport.

“A failure occurred after the relocation of one of the air defence units of Tehran  … It occurred because of a human error,” the CAO report said, adding that the plane was detected by the system as a target approaching Tehran.