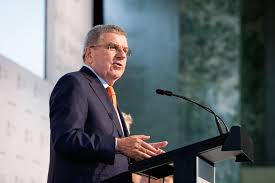 PORT MORESBY, 08 MAY 2019 (INSIDE THE GAMES) – International Olympic Committee (IOC) President Thomas Bach is set to begin a tour of three Pacific nations today when he travels to Papua New Guinea.

Bach will meet with Peter O’Neill, Papua New Guinea Prime Minister and Minister for Sport, following his arrival into the country.

The Papua New Guinea Olympic Committee (PNGOC) revealed Bach will speak with O’Neill on a range of topics, including Government support for sport.

Bach will be present for the official opening of PNGOC’s new headquarters, as well as the signing of a Memorandum of Understanding between the organisation and the Papua New Guinea Sports Foundation.

“It is a privilege to have the head of one of the largest organisations in the world visit our country and we are working with our partners in the Government and corporate sector to ensure that he has a memorable visit.”

A series of events will mark Bach’s first visit to the country, including a live exhibition of sports.

IOC deputy director Pere Miró and James MacLeod, IOC director of NOC relations and Olympic solidarity, will also be among the delegation.

Following a two-day visit to the country, the delegation will then travel to Palau and Guam.

His visit to Palau comes as the country’s National Olympic Committee celebrates its 20th anniversary.

The German is then expected to visit the Guam National Olympic Committee headquarters on his visit to the nation.

He will also meet with members of Guam’s national teams and upcoming athletes, as well as the nation’s sporting facilities.

“We are thrilled that IOC President Bach will be visiting us on Guam,” Blas told PostGuam.

“For someone of his stature in the Olympic realm to spend time with our athletes, is very inspiring.”

Bach will travel to the nations following his brief visit to SportAccord Summit, which is ongoing at the Goldcoast.