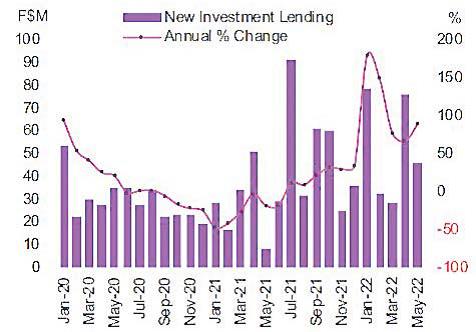 Invesment activity in Fiji contracted sharply over the past two years because of the pandemic as large projects came to a halt as a result of the lockdown restrictions, supply chain disruptions, labour market issues and overall uncertainty.

The Westpac Wave July issue highlighted that because of the above-mentioned reasons the borrowing appetite for investment projects in an uncertain environment was much lower.

However Westpac Fiji’s senior economist Krishal Prasad noted that with Fiji reopening its international borders and the resumption of activity and removal of all restrictions, activity had generally picked up, however at a lower pace.

Mr Prasad said investment activity in Fiji was closely linked to the political environment, with historical data showing softening in investment in the lead up to the general election and given that this was an election year, investors were taking a cautious approach and a lot would depend on the outcome of the election.

According to the report a smooth election and transition of government, if the case, will uplift Fiji’s investment environment and rebuild much-needed confidence in the economy and hence result in significant increase in new investments in Fiji.

The report also shows an improvement in investment spending underpinned by a 32.7 per cent increase in domestic cement production and 25.3 per cent rise in sales in the year to May.

In the report Mr Prasad highlighted some other significant improvements which included increase in new loans for investment purpose, mainly building and construction and real estate sectors).

He said while there was some improvement noted in investment activity, the rise in building material prices, along with investors’ cautionary strategy ahead of the general election, was projected to keep investment activity subdued for the coming few months.

In the report Mr Prasad adds that fiscal policy will play an important role as Government maintains a low and attractive tax regime to support private sector investment while also channelling public spending towards improving the delivery of public services while the resumption of the tourism industry is critical for the recovery of the overall economy, jobs and economic stability.

“To improve the competitiveness of the tourism sector, Government in the Revised 2021/22 Budget reduced all major tourism-related taxes and introduced attractive tax incentives to stimulate new investments and reinvestments in the sector.

A number of additional policy measures have also been put in place to promote growth in other economic sectors with the aim of further economic diversification.”

He said going forward, with the economy projected to rebound strongly this year underpinned by rising productivity, political stability post-election, improved private sector confidence and the implementation of critical reforms by the Fijian Government, investments were also expected to gradually improve.