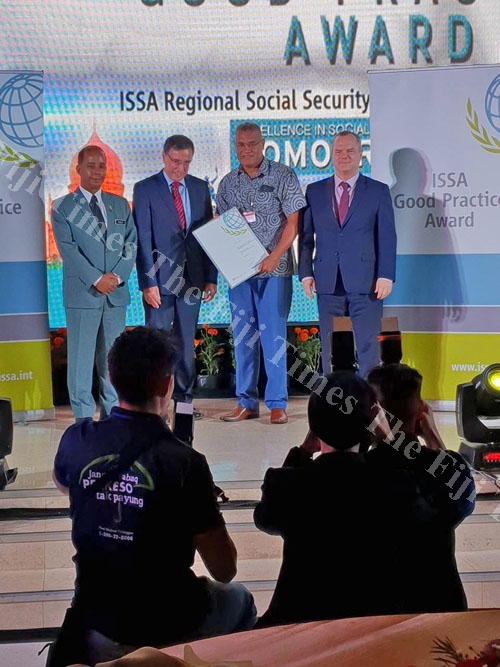 A statement from FNPF said chief executive officer Jaoji Koroi recieved the awards — Certificate of Merit Awards for Practices in managing natural disasters: delivery of service in times of need and Certificate of Merit Awards for Employer Online Portal — for its responsiveness to its stakeholders’ needs, as well as developing online services to ease doing business with its customers.

The event was held in Kuala Lumpur, Malaysia from October 2-4. “FNPF is humbled by ISSA’s recognition of our efforts to serve our members and employers better and in line with international best practice standards,” Mr Koroi said.

“As the superannuation landscape continually evolves, FNPF has implemented various initiatives especially with better digital platforms to ensure that our services are on par with our stakeholders changing needs.

“The Pacific region’s vulnerability to natural disasters and adverse weather patterns as a result of climate change, means that our response has to be quick and effective.

“That was evident during the Tropical Cyclone Winston assistance period in 2016 which saw our offices all around the country transformed to processing centres to help members rebuild their lives after one of the worst natural disasters to hit the country.”

Mr Koroi said ISSA’s recognition was a testament of our staff’s commitment to serving members in the aftermath of TC Winston.

ISSA is the international organisation for social security institutions, government departments and agencies. Established in 1927, a total of 330 organisations from 158 countries are ISSA members.