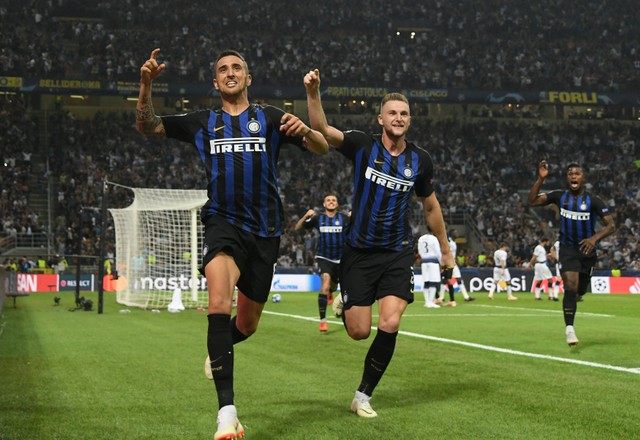 MILAN (Reuters) – Inter Milan staged a late smash-and-grab raid as goals by Mauro Icardi and Matias Vecino secured a 2-1 home win over Tottenham Hotspur in their Champions League Group B opener on Tuesday.

Spurs appeared to have delivered the perfect response to their stuttering domestic form as they led through Christian Eriksen’s deflected 53rd-minute strike.

Inter, who have started poorly in Serie A, were offering little threat but Icardi’s superb 86th minute volley brought the San Siro to life and Vecino’s stoppage-time header flattened a Tottenham side who have themselves been struggling.

With group leaders Barcelona, 4-0 winners at home to PSV Eindhoven, looming for Spurs in their next Champions League fixture at Wembley Stadium, the London side’s hopes of emerging from a tough group are already in peril.

Inter scored four goals in each of their two previous home matches against Tottenham in Europe — the first in 2010 when Gareth Bale scored a memorable hat-trick for Spurs after halftime in a 4-3 win for the Italians.

A repeat of that free-wheeling action never really looked likely during an opening period short on clear chances.

Inter enjoyed some early pressure but it was Tottenham who had the best chance of the half when Eriksen picked out Harry Kane with an astute pass and the England striker rounded keeper Samir Handanovic only to see the ball squirm away from him.

Eriksen also tested Handanovic with a free kick, while at the other end Spurs keeper Michel Vorm had to be alert to palm away a cross that deflected off his team mate Davinson Sanchez.

Seven minutes after halftime it was playmaker Eriksen who gave Tottenham the lead in fortuitous circumstances.

His initial shot was well-saved by Handanovic but when the ball came back out of the area the Dane’s follow-up effort took a wicked deflection as Miranda tried to block and the spinning ball deceived the keeper who could not keep it out of the net.

Inter responded and should have levelled almost immediately when Ivan Perisic headed too close to Vorm.

Spurs defended well after that, however, and seemed in complete control and on their way to only their second competitive victory on Italian soil.

Then, out of nowhere, it all went horribly wrong for Mauricio Pochettino’s side — who have now lost three games in a row in all competitions under the Argentine for the first time.

There did not look too much danger when Kwadwo Asamoah lifted over a cross from the left but Icardi met it with a sensational right-foot volley to give Vorm no chance.

Inter then laid siege to Tottenham’s goal and the visitors buckled as Vecino rose to loop a header past Vorm.