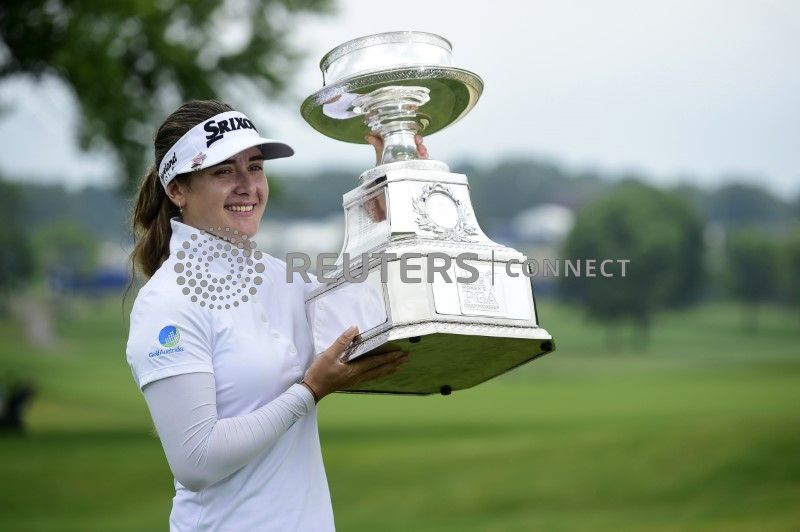 (Reuters) – Four years ago Hannah Green was attending the U.S. Women’s Open as part of her reward for winning a Karrie Webb scholarship. On Sunday, she followed in Webb’s footsteps by winning the Women’s PGA Championship, becoming the third Australian to win a major.

Webb, who won the event in 2001, has been sponsoring Australia’s top female amateurs with $10,000 scholarships since 2008, bringing them on visits to the United States to get a taste of major championships.

Inspired by her visit to Lancaster Country Club in 2015, Green turned pro a year later and on Sunday claimed her first LPGA Tour victory, joining Webb (seven titles) and Jan Stephenson (three) as Australian women’s major winners in the process.

With Webb looking on nervously from the galleries, the 22-year-old Green kept her composure to get up-and-down from a greenside bunker at the last, sinking a four-foot putt to pip defending champion Park Sung-hyun by a stroke.

“Being able to stay in a house with her (Webb), watching everything she does in a tournament … it definitely gave me a big insight into what it was like,” Green said after her win at Hazeltine National in Minnesota.

Green, the daughter of a New Zealand father and a Scottish mother, led wire-to-wire and finished at nine-under-par 279 to stave off Park.

Hazeltine is no stranger to long shots. It is where Y.E. Yang and Rich Beem were able to fend off Tiger Woods at the men’s PGA Championship in 2009 and 2002.

The victory by Green, ranked 114th in the world at the start of the week, was no less surprising.

“To win a major championship as my first event is crazy,” she said. “I wasn’t really feeling as confident at the start of the week with my swing.”

Webb was nearly as excited as Green.

“This has just changed her life. She won’t realize until she wakes up tomorrow morning,” said the Queenslander.

“That’s world class the way she closed out that tournament.”

“With Ashleigh (Barty) winning the French Open (tennis) and becoming world number one today, we’re really playing catch-up as far as where golf fits in that,” she said.