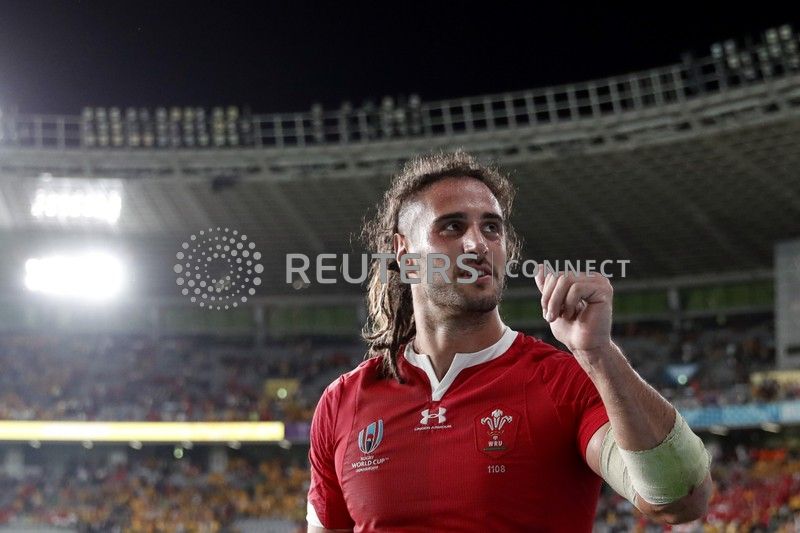 TOKYO (Reuters) – Wales backrower Josh Navidi has been ruled out of the remainder of the Rugby World Cup after tearing his hamstring during the first half of Sunday’s quarter-final victory over France, coach Warren Gatland said on Monday.

Gatland told a news conference that Navidi would be replaced with a back, rather than another forward, because of concerns over others in the squad. Chief among those is centre Jonathan Davies, who was withdrawn from Sunday’s team at the last minute.

“He’s got a grade two (hamstring tear) and will be ruled out,” Gatland said of Navidi. “We have a process that we need to go through with World Rugby.

“Given we brought six backrowers and have five fit at the moment and have been a little bit short in numbers in the backs, then it will probably be a back who comes out as a replacement.”

“It is disappointing for him because he has been so influential for us over the past 12 months.”

Gatland added that Navidi has been an influential player over the past 12 months but expects both Davies and fellow midfield back Hadleigh Parkes, who played on Sunday with a broken hand, to be available for the semi-final.

“He (Davies) was touch and go for the weekend. The difficult decision with Jonathan was going into the game with two midfielders who weren’t 100%,” Gatland said.

“Hadleigh still has a broken bone in his hand and was also carrying a shoulder contusion, so to have one centre who was fit was pretty important for us.”

Gatland also admitted that his side had used up their “get out of jail free card” in their 20-19 victory over a French team reduced to 14 men by Sebastien Vahaamahina’s red card and will need to raise their game against the Springboks in Yokohama.

The list of South Africa’s attributes didn’t stop there.

“And a good kicking game as well. So you’ve got to be able to handle (all) those threats. They’ve got a couple of pretty exciting wingers, too,” he said.

Yet Gatland, who is stepping down after the tournament to take charge at his hometown club Waikato Chiefs, remains confident that Wales have their best chance to win a first World Cup if they get past South Africa.

“You get these opportunities once in a lifetime and you’ve got to grab them with both hands,” he said.

“It’s about having no regrets. That’s the message of this week.”