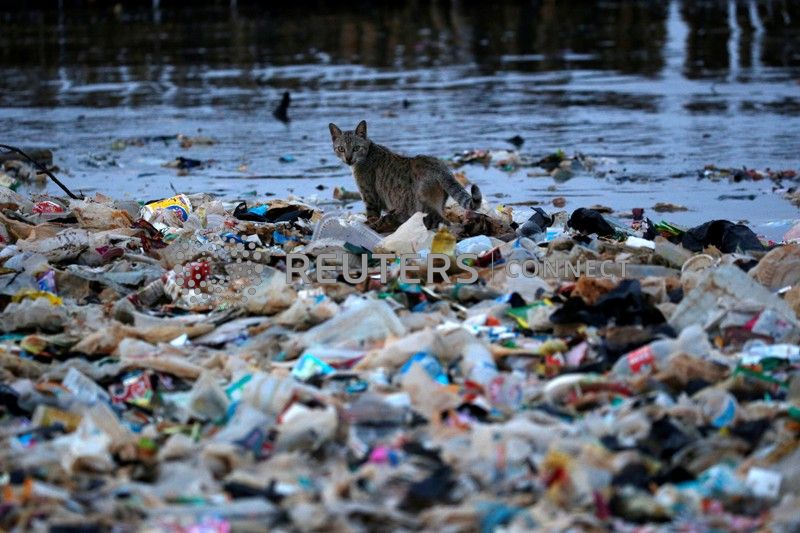 FILE PHOTO: A cat is seen among rubbish at a shoreline in Jakarta, Indonesia, June 21, 2019. REUTERS/Willy Kurniawan

JAKARTA (Reuters) – Indonesian members of parliament have decided to delay confirmation of a government plan for a levy on plastic bags, but the finance minister said she was optimistic the legislation was on track to be adopted this year.

The archipelago of 17,000 islands churns out 9.85 billion of the bags each year, making it the world’s second biggest contributor of plastic pollutants in the oceans, Sri Mulyani Indrawati told members of parliament.

She proposed excise duties starting from 30,000 rupiah (1.69 pounds) for each kilogram of plastic, or 200 rupiah per bag, saying she hoped the measure would cut the number of plastic bags Indonesia used and the waste it produced.

“God willing we will implement it this year, we are optimistic,” Indrawati told reporters late on Tuesday.

“The right fiscal instrument to reduce a tendency to consume something dangerous is an excise duty.”

The comments followed a decision by parliament’s finance commission to take more time to deliberate on the issue, after a hearing where the minister ran into resistance from both the ruling coalition and the opposition.

“Why plastic? It’s not fair if it’s just plastic,” said Misbakhun, a ruling coalition MP. “Many other things damage the environment, like rubber, for example.”

First introduced by the government in 2016, the plan for the levy has been delayed several times beause of opposition from plastic producers. But it was not immediately clear when the panel would make its decision.

The excise plan presented to parliament will hurt the industry, said an official of a grouping of plastics manufacturers, adding that government support for efforts to recycle waste would be a better alternative.

“An excise duty on plastic bags is useless,” Sadiman said, adding that the levy would boost producers’ costs while not cutting consumption of plastic bags.

Most of Indonesia’s marine plastic debris is caused by the mismanagement of waste on land, so that it often flows into landfills or rivers, the World Bank said in a report on Monday.

In its report, the Washington-based lender backed the excise duty plan while also suggesting that Jakarta invests more in solid waste management and water treatment to stem flows into the ocean.