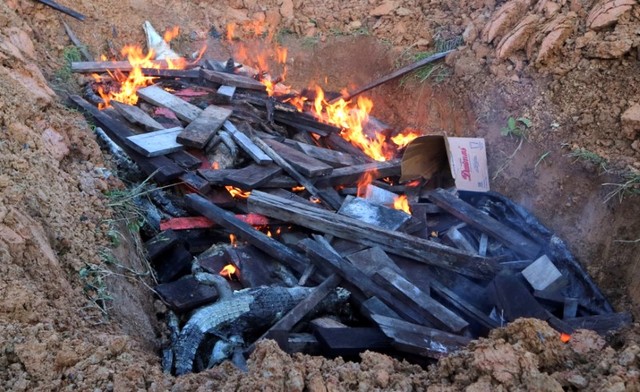 Some of the hundreds of crocodiles, killed by angry locals after a man was killed in a crocodile attack, are burned by government authorities in Sorong regency, West Papua, Indonesia, July 16, 2018. Antara Foto/Olha Mulalinda/ via REUTERS

JAKARTA (Reuters) – Indonesian authorities have burned the carcasses of nearly 300 crocodiles slaughtered by villagers retaliating for the death of a man attacked by a reptile from a breeding farm, a government official said on Tuesday.

After the victim’s burial, an angry mob armed with knives, hammers and clubs burst into the farm area and bludgeoned to death 292 of the protected reptiles.

“The dead crocodiles have been burned and buried around the farming area,” Basar Manullang, a conservation official in the province of West Papua, said in a text message.

Photos showed the crocodiles had been placed in a large pit in the ground, along with wood for kindling, and set alight.

The 48-year-old victim had entered the crocodile farm in the Sorong district and was thought to be picking grass for animal feed when he was attacked.

Manullang said the farm had been given a license to breed protected saltwater and New Guinea crocodiles in 2013 for preservation and also to harvest some of the animals.

The eastern area of Papua has a special dispensation that allows some of the crocodiles to be exploited for skin, spawning a retail industry in items from belts to bags and shoes made from the skin of the reptiles.

Muhammad Nur, who owns the Crocodile Craft Centre based in the Papuan port of Merauke, said the conservation agency only allowed medium-sized crocodiles to be used.

Police had been unable to repel the attack on the breeding farm by the angry villagers, Sorong police chief Dewa Made Sidan Sutrahna said by telephone.

Witnesses will be questioned to determine if the breeding farm had been negligent and any laws broken in killing protected crocodiles, he added.

An animal welfare group urged that those responsible be held accountable for the killing of the crocodiles.

“The government needs to show its firmness in handling animal rights,” said Ode Kalashnikov of International Animal Rescue in Indonesia.

While keeping crocodiles on a farm was not ideal, releasing them into the wild meant they risked being killed by poachers, he said, pointing to recent reports of an elephant being poisoned and an orangutan shot in Indonesia.