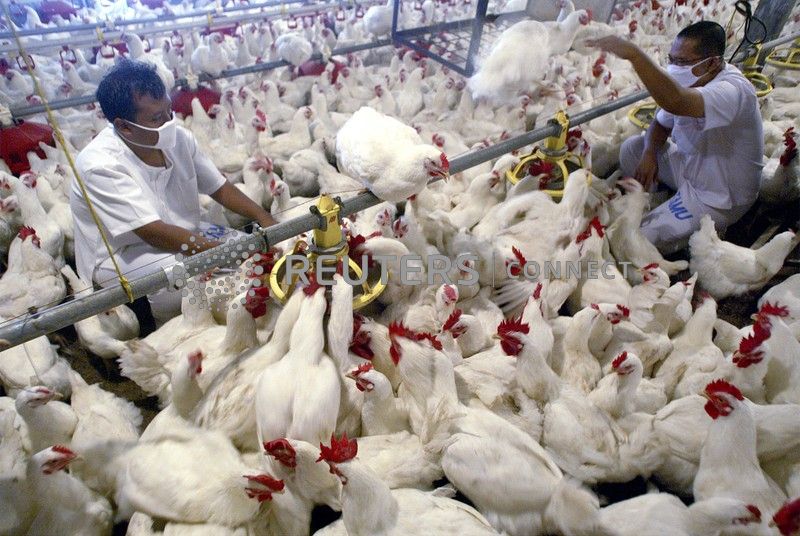 JAKARTA (Reuters) – Indonesia has told poultry breeders to cull around 3 million chickens over a two-week period from Wednesday to prop up plunging prices, as farmers protested by giving away thousands of live birds for free.

Indonesia has been producing more chicken than it consumes, putting pressure on prices. Chicken farmers have been complaining that live bird prices have been below a government floor price and cost of production for months.

Breeders increased chicken production to cash in on an expected upturn in demand during the Muslim Eid al-Fitr holidays earlier this month. But the Agriculture Ministry said the demand did not turn out as expected.

In response, the government has told farmers to cull 68-week old chickens over a two-week period until July 9, the Agriculture Ministry said in a statement.

Sugiono, the ministry’s director of breeding and livestock production, estimated 3 million chickens would be culled, reducing the supply of day-old chicks by 1.5 million per week.

In the city of Yogyakarta on Java island, where prices were especially low, protesting farmers gave away 5,000 chickens, saying prices had been depressed for 10 months, even with a spike in demand around the Muslim fasting month.

According to the agriculture ministry, the average price of live birds in Indonesia was 20,216 rupiah ($1.43) per kg on Tuesday, compared with a government floor price of 18,000 rupiah per kg.

The government sets a floor and ceiling price for several staple foods, including chicken and corn.

Farmers in Yogyakarta said they had to sell their birds for only 7,000 rupiah per kg.

The association of Yogyakartan farmers said their businesses were dying and almost bankrupt. “Some of us are afraid to raise chickens,” it said in a statement.

Indonesia previously ordered the culling of 6 million breeder chickens to control oversupply back in 2015.

The agriculture ministry is prepared to order more culling if prices do not rise.

“If the prices of live birds are not yet in line with benchmark prices … culling of parent stock of 60-week old chickens will be launched,” I Ketut Diarmita, director general of livestock and animal health at the ministry, said.