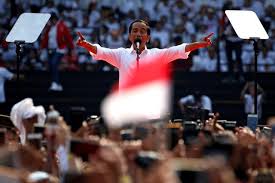 JAKARTA (Reuters) – Indonesian President Joko Widodo is considering reshuffling his cabinet before he is sworn in for a second five-year term in October, according to comments he made in an interview with the Tempo newspaper published on Monday. Widodo won the election by around 10 percentage points, according to quick counts of a sample […]