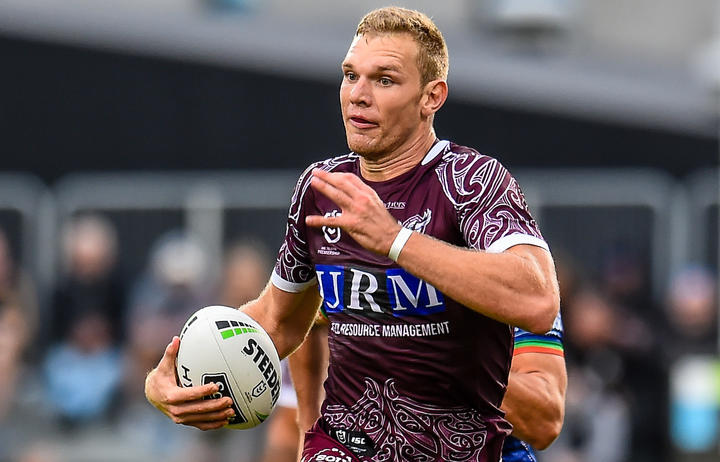 Tom Trbojevic of the Manly Sea Eagles during an NRL League match in March 2019. Photo: Photosport/RNZ

Tom Trbojevic highlighted on Sunday what Australia’s sports-starved fans had been missing as the National Rugby League’s (NRL) gamble to become the first professional code to return after the Covid-19 shutdown appeared to pay off.

Manly fullback Trbojevic crossed twice and had a hand in three other tries as the Sea Eagles thrashed the Canterbury Bulldogs 32-6 at an empty Central Coast Stadium to end the first round of matches in the resumed season.

Manly’s victory set up an enticing contest next Saturday when they face the Parramatta Eels, who secured a 34-6 victory over the Brisbane Broncos on Thursday and are undefeated after three games.

The decision to return earlier than their competitors was justified with good television ratings.

The opening match between Brisbane and Parramatta raked in the highest television audience for a regular season game since 2014, Australian Associated Press reported.

Australian Rules football is not scheduled to resume until 11 June, while Australia’s Super Rugby teams will play a domestic competition from 3 July.

Football’s A-League is not due to restart its season until mid-July.

The NRL also announced new rules designed to speed up the game and make it more of a spectacle, cutting one of the two on-field referees for this season to reduce costs.

Melbourne Storm captain Cameron Smith said the game had definitely been quicker after his side lost 22-6 to the Canberra Raiders on Saturday.

“The Raiders played a better style of football – they adapted much better to the one referee – that’s what I believe has increased the speed of the game,” Smith said.

Organisers placed large cardboard photographs of fans in the seats and broadcasters piped crowd noises to the television audience.

The noise reached an artificial crescendo in the early match on Sunday when an injury-ravaged Newcastle Knights fought back from 14-0 down to force their clash with the Penrith Panthers into extra time.

“Look at the crowd, they’re on the edge of their seats. They don’t want to move they’re that tense,” commentator Andrew Voss joked at the end of regular time with the score locked at 14-14.

Penrith’s Matt Burton, who missed two attempted field goals in regulation time, filed with another three in the additional 10 minutes.

“Greatest draw I have ever seen in the history of rugby league,” said former Australia international Ben Ikin, who know works as a broadcaster.

Voss was more succinct as he wrapped up the match at Campbelltown Stadium in Sydney.