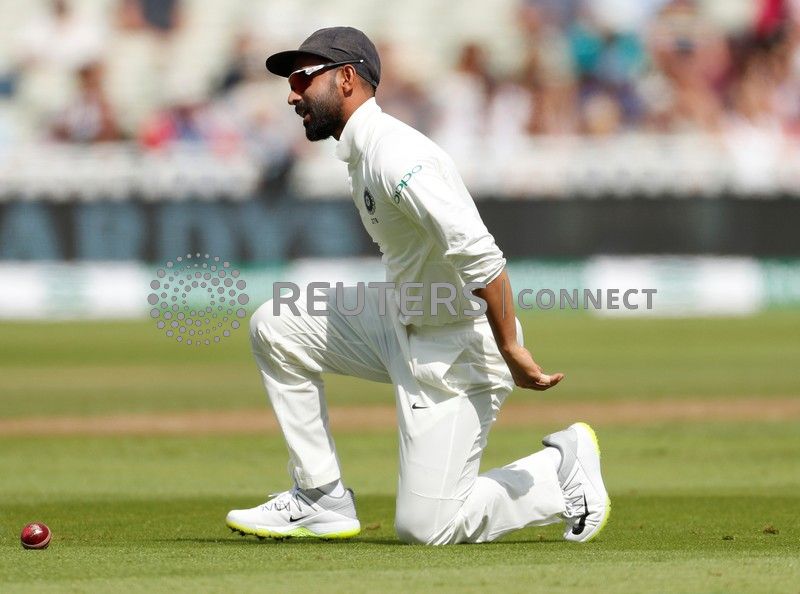 (Reuters) – The last time Ajinkya Rahane scored a century in international cricket was over two years back but the India test vice-captain says the drought does not concern him as long as he is contributing for his side.

The middle-order batsman was dismissed after a gritty 81 in the opening test against West Indies in Antigua on Thursday, the sixth time he had gone past a half-century in the format since scoring 132 against Sri Lanka in Colombo in August, 2017.

Rahane, 31, fell short of the three-figure mark again when he was bowled by paceman Shannon Gabriel, via an inside edge, but not before he had resurrected the world’s top-ranked test side from a precarious 25-3.

“I knew this question will come, I was ready,” Rahane told reporters after a brief laugh when he was asked about missing out on a hundred again.

“As long as I am contributing for my team, that’s what matters. Yes, I was thinking about my hundred but the situation we were in was tricky. I am not too worried or concerned about my hundred as that will come automatically.

“As long as I am at the crease, I am thinking about my team, I am not a selfish guy. I thought 81 on that wicket was really crucial and we are in a decent position.”

Rahane’s innings helped India steady the ship with the right-handed batsman adding 68 for the fourth wicket with opener KL Rahul and another 82 for the next with Hanuma Vihari to help the touring side reach 203-6 on the rain-truncated day.

He had missed out from India’s World Cup squad and used the time for a stint with English County Championship side Hampshire.

With India playing their first test in over seven months, the Hampshire stint was helpful, Rahane said.

“That was a good thing for me because I took the decision when I got to know that I was not in the World Cup squad,” Rahane said. “I wanted to make use of the two months and I thought the county stint helped me a lot.

“I was focusing on my batting, few areas to work on basically. When you play with Dukes ball in England you got to play close to your body.

“I was batting at No. 3 as well so luckily I got to play the new ball there. Those two months I really used my time well…I thought I was in good nick and it’s good that I went there and had some batting practice.”