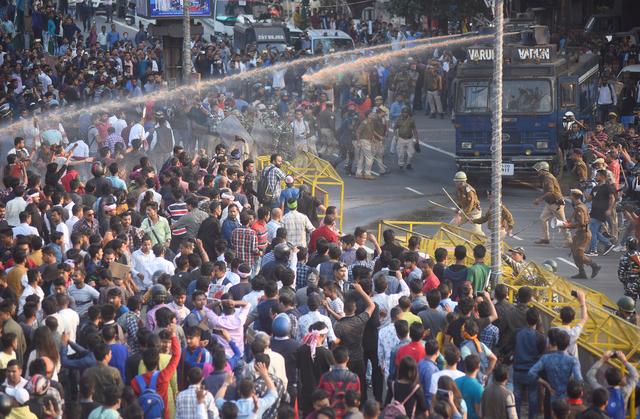 Police use water cannon to disperse demonstrators during a protest against Citizenship Amendment Bill (CAB), that seeks to give citizenship to religious minorities persecuted in neighbouring Muslim countries, in Guwahati, India, December 11, 2019. REUTERS/Anuwar Hazarika

Violence broke out in the ethnically diverse northeast while parliament debated the bill, as protesters against the legislation clashed with police.

It is the third key election promise that Prime Minister Narendra Modi’s government has delivered since he was re-elected in May, re-energizing his nationalist, Hindu support base and drawing attention away from a slackening economy.

Soldiers were deployed in Tripura state and reinforcements put on standby in neighboring Assam, both of which border Bangladesh, where people fear an influx of settlers.

“The bill will take away our rights, language and culture with millions of Bangladeshis getting citizenship,” Gitimoni Dutta, a college student, said at a protest in Assam’s main city of Guwahati.

The bill passed the upper house of parliament with 125 members supporting it and 105 opposing.