Indians vote in fifth phase of election; violence in Kashmir 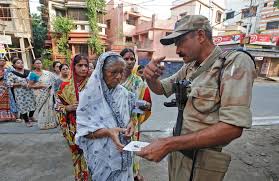 A security personnel checks the identity card of a woman as she stands in a queue with others to cast their vote at a polling station during the fifth phase of general election in Howrah, on the outskirts of Kolkata, India May 6, 2019. REUTERS/Rupak De Chowdhuri

NEW DELHI/SRINAGAR (Reuters) – India’s northern heartland began voting on Monday in the fifth phase of a staggered general election, with Prime Minister Narendra Modi hoping his record on national security will win him a second five-year term. More than 87 million people across seven states are eligible to vote on Monday, including in the […]