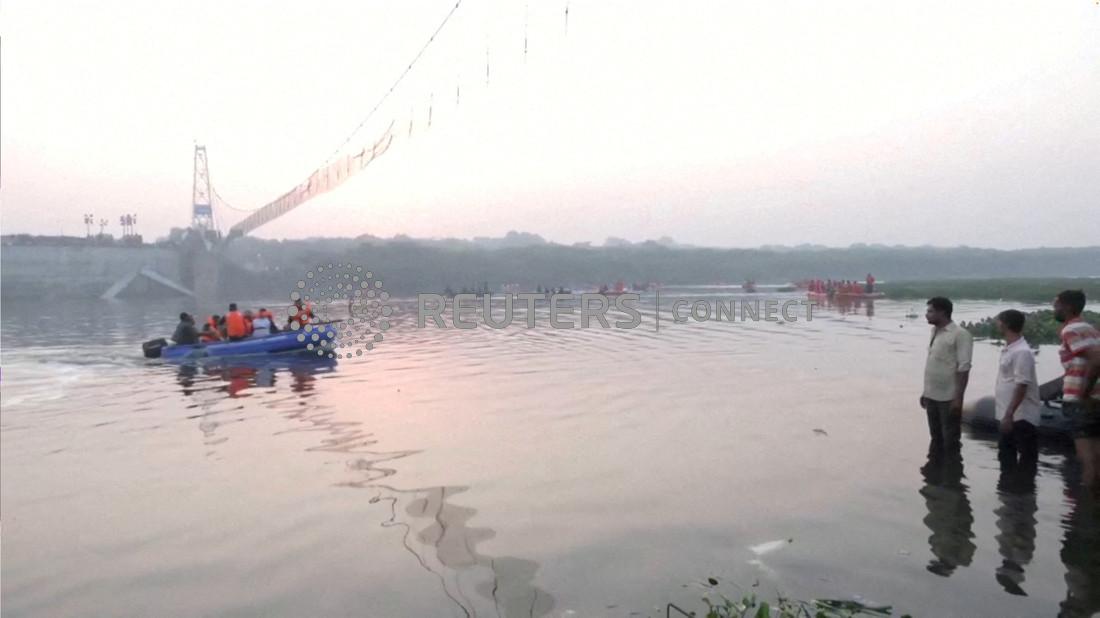 FILE PHOTO: People look on as rescuers in boats work at the site of a suspension bridge collapse in Morbi town in the western state of Gujarat, India, October 31, 2022. ANI via REUTERS/File Photo

AHMEDABAD/NEW DELHI (Reuters) – Police in India aim to arrest the boss of a clock-making company that managed a colonial-era footbridge in a small industrial town in Gujarat until it collapsed last year, killing at least 135 people, two senior police officials told Reuters.

The 145-year-old suspension bridge in the town of Morbi was packed with sightseers when its collapsed on Oct. 30, plunging hundreds of people into the Machchhu river below. The victims were largely women and children who died due to drowning.

A look-out circular has also been issued to prevent Patel from leaving the country, Bhatia added. Patel’s mobile phone remained switched off on Monday and messages from Reuters did not get delivered to him.

Staff at Oreva Group’s offices in Ahmedabad city and Morbi declined to respond to Reuters’ telephone queries. The company did not immediately respond to a query over email.

The warrant was issued after Patel did not respond to multiple police summons and could not be found at his residential addresses in Ahmedabad and Morbi, a senior police official said.

“We have strong evidence that points to Patel being responsible for the bridge collapse,” said the official, who did not wish to be named as he was not authorised to speak to media.

“The evidence also points out that the cables of the bridge needed repairs; they had not been repaired since the bridge was constructed during colonial times, and this is one of the main reasons for the collapse.”

The official said police evidence against Patel includes statements from nine people who were arrested following the bridge collapse, including ticketing clerks accused of letting too many people onto the bridge and contractors that had been in charge of repair work.