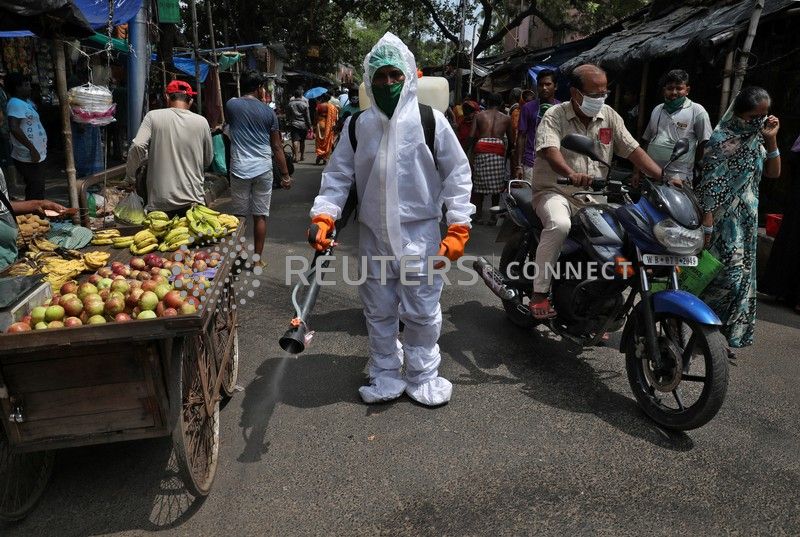 FILE PHOTO: A municipal worker sprays disinfectant to sanitize a street amidst the spread of the coronavirus disease (COVID-19) in Kolkata, India, September 18, 2020. REUTERS/Rupak De Chowdhuri

NEW DELHI (Reuters) – India’s parliament session that began this week is likely to be cut short after 30 lawmakers were found infected with the coronavirus, two senior parliament officials said, as the number of cases in the country rose to 5.3 million.

The Indian parliament met for the first time in six months on September 14 and was to function until Oct. 1, but the two officials said its duration could be reduced by a week.

“Since the commencement of the session the number of positive cases have gone up so the government is thinking of cutting short the session,” said one of the two officials, who are involved in the functioning of parliament proceedings.

The government has also mandated daily tests for journalist entering parliament to cover the session from Saturday.

Piyush Soperna, joint director at the country’s upper house’s secretariat, said in an email response that it has no information on the issue of prematurely ending the parliament session next week.

India, which recorded 93,337 new infections in the last 24 hours, has been posting the highest single-day caseload in the world since early August, according to a Reuters tally.

However, deaths in India have been relatively low.

The virus has killed 1,247 people in last 24 hours, taking the total death toll to 85,619, government data showed on Saturday.

The lawmakers who have been infected include Nitin Gadkari, highways and medium and small enterprises minister in Prime Minister’s Narendra Modi’s cabinet.

On Wednesday, India’s federal government ordered its states not to hoard oxygen supplies and allow free movement to cope with the rising number of cases.