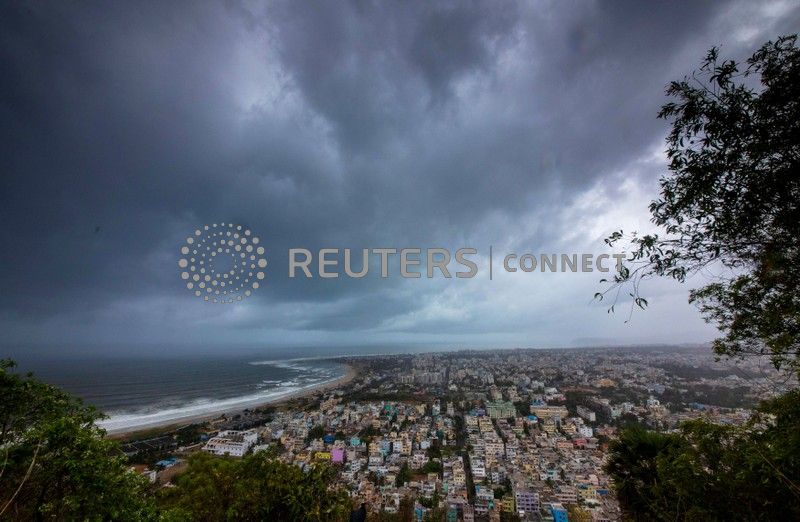 Clouds loom ahead of cyclone Fani in Visakhapatnam, India, May 1, 2019. REUTERS/Stringer

BHUBANESHWAR, India (Reuters) – India began evacuating hundreds of thousands of villagers on Wednesday and shut down operations at two major ports on its east coast ahead of an impending cyclone expected to make landfall on Friday.

The state of Odisha has also moved in thousands of disaster management personnel to help those living in mud-and-thatch homes in low-lying areas take shelter from Severe Cyclonic Storm Fani.

“We are making best efforts to inform them about the cyclone and move these vulnerable people to cyclone shelters,” Bishnupada Sethi, the state’s special relief commissioner, told Reuters.

Tourists have also been advised to leave the coastal temple town of Puri, a sacred destination for Hindu pilgrims.

India’s cyclone season generally lasts from April to December with severe storms leading to evacuations of tens of thousands, widespread deaths and damage to crops and property, both in India and Bangladesh.

Authorities at ports in Paradip and Visakhapatnam ordered ships to move out to sea to avoid damage.

“Paradip port operations will be suspended from tonight, all vessels have been told to leave the port,” S.K Mishra, traffic manager at the port told Reuters.

Two decades ago, a super-cyclone battered the coast of Odisha for 30 hours, killing 10,000 people. In 2013, a mass evacuation of nearly a million people saved thousands of lives.

Tropical Storm Risk cyclone tracker labeled Fani a category 3 storm on a scale of a low 1 to a powerful 5.