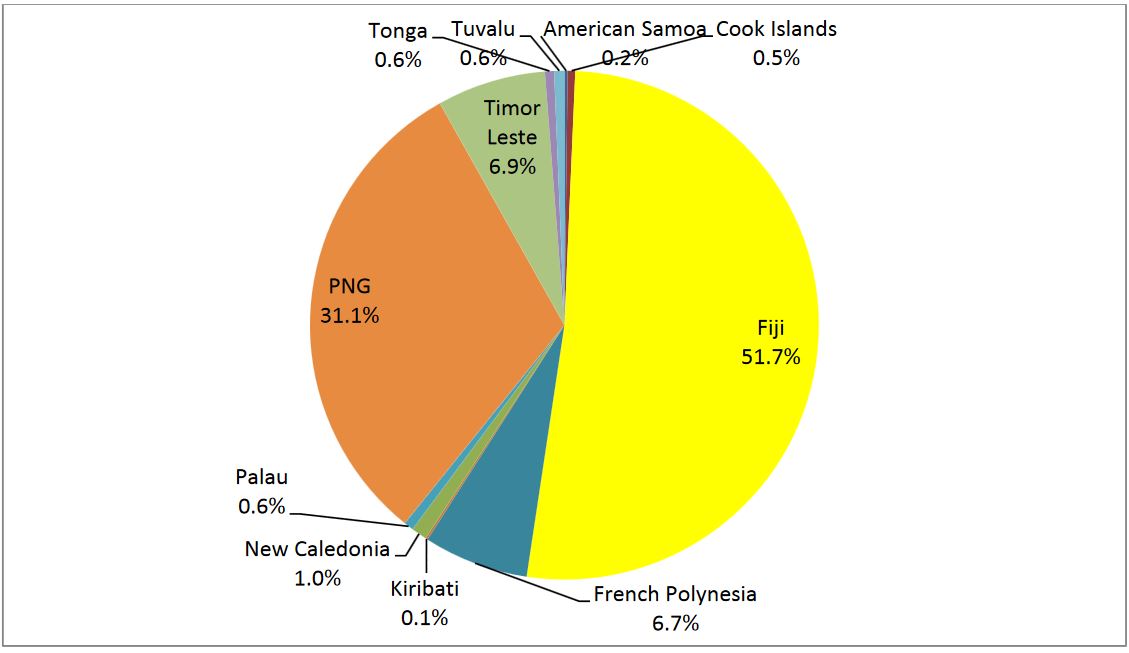 The graph shows the destination share (%) of the India market in the region. Fiji alone accounted for more than half of the total Indian arrivals to the region at 51.7 per cent.

INDIA is now Fiji’s fastest growing tourism source market recording a rapid growth of 27.8 per cent in the first quarter of this year when compared with the same period last year.

This rapid growth from the India market contributed to a 5.1 per cent increase in total visitor arrivals to Fiji in the first quarter of this year against the March quarter of last year.

In its review its Quarterly Review of Tourist Arrivals to the Pacific Island Countries (PICs) for the first quarter of 2018, the South Pacific Tourism Organisation (SPTO) noted that Fiji’s tourist arrivals from India also grew by 2.1 per cent in the first quarter of this year reaching 1518 compared with the 1487 arrivals in the 2017 December quarter.

The solid growth was boosted by India’s two leading destinations, Fiji and PNG by 2.1% and 46.4 per cent respectively.

Compared with the same quarter last year, tourist arrivals from India on a regional level exceeded by 7.7 per cent – with arrivals from Fiji, Cook Islands, Palau and Tuvalu driving the outcome.

Disaggregating by shares, Fiji and Papua New Guinea accounted for 82.8 per cent of the total India arrivals to the region.

Fiji alone accounted for more than half of the total Indian arrivals to the region at 51.7 per cent whilst PNG at 31.1 per cent.

Timor Leste followed at 6.9 per cent and French Polynesia at 6.7 per cent.

All the other countries, accounted for the remaining 16.6 per cent share.