Increase in hybrid vehicles to reduce use of fossil fuel 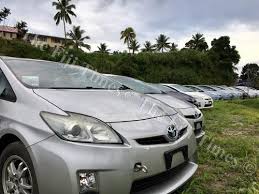 ONE of the ideas behind the promotion of the use and purchase of hybrid vehicles locally is to reduce the usage of fossil fuel.

While responding to questions raised by Opposition Leader Sitiveni Rabuka during a debate on a Bill for an Act to amend the Environment and Climate Adaptation Levy Act 2015 in Parliament yesterday, Attorney-General Aiyaz Sayed-Khaiyum said duty on hybrid vehicles had been zero rated for a few years because “we wanted people to move away from the usage of vehicles or the purchase of vehicles that are purely dependent on fossil fuel”.

“The whole idea of promoting hybrid vehicles is two-folds — one of them is to reduce usage of fossil fuel and the other one of course is that it is environmentally a lot more friendly because it emits less carbon out into the atmosphere,” he said.

“The third one that a lot of people probably may have criticised because of the increase of the volume of vehicles on the roads is to be able to have ordinary Fijians have access to vehicles.

“The ability to drive and use a motor vehicle – for example, before people who worked in Government like drivers could not afford to buy vehicles for themselves, but for the past few years they have been able to do that.”

Mr Sayed-Khaiyum said although there were problems such as an increase in cars on Fiji’s roads, there were projects undertaken by Government that would help address the problems.

One of this is the four-lane road project beginning from Nausori.

“Of course it does lead to other issues like lots of cars on the road and as we’ve announced that with the completion of the four-lane road from Nausori all the way to Suva will soon have dedicated bus lanes making public transportation a lot more attractive.”