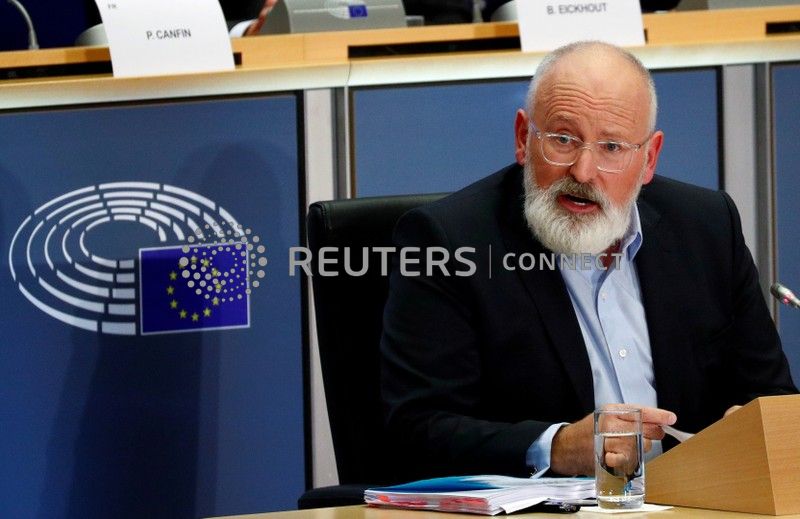 BRUSSELS (Reuters) – The EU will start work immediately on a tax on polluting foreign firms to shelter EU businesses striving to meet a goal to be climate neutral by 2050, the senior official set to take responsibility for climate in the new European Commission said on Tuesday.

Frans Timmermans, who was speaking at a confirmation hearing in the European Parliament, is likely to oversee the European Green Deal, the signature climate and environmental policy package in the executive that takes office on Nov. 1.

As part of that deal, the carbon tax would shield European companies from competitors based in countries where climate protection schemes are less strict.

“We should also be prepared to consider other instruments, for instance a carbon border tax, to level the playing field for European products,” Timmermans said in his opening statement to EU lawmakers.

Asked how feasible the tax was, he said he believed it could be compatible with World Trade Organization rules, but the Commission would have to research that.

“My idea would be to say to our international partners: we are making this transition to a climate neutral economy by 2050. If you make the same measures or comparable measures going in the same direction, we will make this voyage together,” he said.

Otherwise they would face a border adjustment based on the carbon footprint of their products.

As a step to climate neutrality by 2050, Timmermans said an EU target of a 55% cut in carbon emissions by 2030 was preferable to that of “at least 50%” laid out by the Commission president, but again he said the Commission would have to research that.

In the face of high European ambition, he was asked whether one way to level the playing field would be to allow non-EU states to participate in the EU Emissions Trading System, which makes polluters pay to emit carbon, instead of serving them with a border tax. He said that could be an option.

Some energy-intensive European companies have said they would support a border tax to help them tackle competition from non-EU companies faced with laxer environmental laws and therefore cheaper production costs.

They have also said much depends on the design of regulations and they would take years to agree and implement.

Steel giant ArcelorMittal Europe has been the first to speak out.

“A carbon border adjustment is an effective and fair way to ensure every country plays its part in reducing global CO2 emissions,” ArcelorMittal Europe Flat CEO Geert Van Poelvoorde said in an emailed statement on Tuesday.