Inclusion and religion face off in Folau hearing 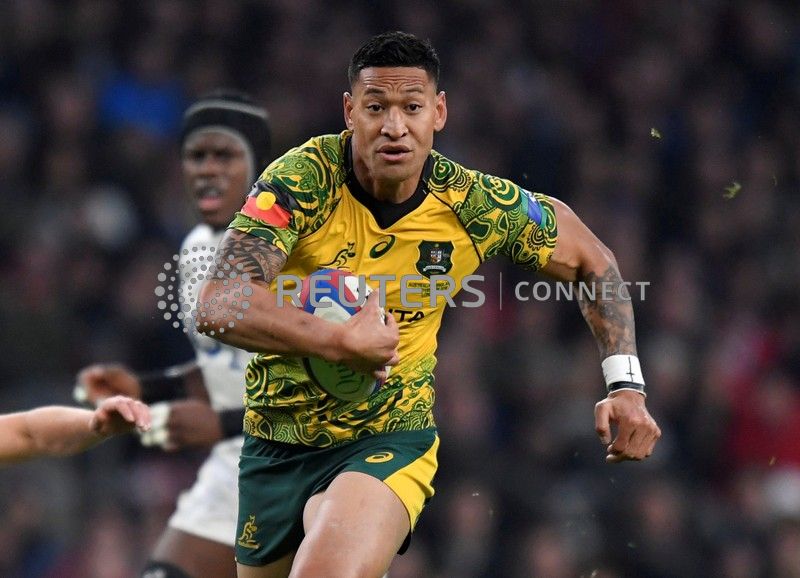 MELBOURNE (Reuters) – Israel Folau’s fight to save his Wallabies career will come to a head at a code of conduct hearing on Saturday, a trial cast as a clash between religious freedom and an organisation’s moral commitment to ensure an inclusive working environment.

A three-member panel will weigh whether Folau, a fundamentalist Christian, breached Rugby Australia’s code of conduct for writing a post on social media that said hell awaits “drunks, homosexuals, adulterers” and others.

RA and Folau’s Super Rugby team, the New South Wales Waratahs, have already publicly committed to terminating Folau’s contract, so the closed hearing has been written off by some observers as a formality.

RA served a breach notice to Folau last month that said his social media post had “disrespected” people on the basis of their sexuality.

The governing body will argue that the 73-test fullback’s commentary is a form of vilification, at odds with its inclusion policy and a 2014 pledge to remove homophobia and other forms of discrimination from the game.

RA will also argue that Folau is a repeat offender, having caused similar controversy with a social media post last year that said gay people would go to “hell” unless they repent.

Yet despite being hauled before RA and Waratahs’ executives for “discussions” about the post last year, Folau was given no sanction.

Instead, RA chief executive Raelene Castle said the body had “accepted Israel’s position” that he had not intended to upset people intentionally or bring disrepute to the game.

RA’s conciliatory stance in 2018 is at odds with their forceful assertion in last month’s breach notice that Folau was “warned … formally and repeatedly” about appropriate social media use.

For his part, Folau has never acknowledged publicly that he received any such warning and instead emphasised in a column that he told RA that he could “never shy away” from his personal beliefs.

The 30-year-old, who moved to rugby union from Australian Rules in 2013, may argue that RA’s code of conduct is itself discriminatory in that it seeks to place constraints on his desire to express what he regards as gospel truth.

The outcome may boil down to a technical issue, however, as to whether Folau’s alleged breach is enough for the cash-strapped governing body to terminate his contract.

The Daily Telegraph newspaper reported that RA had attempted to include clauses on social media use in a four-year contract extension that Folau signed late last year but the player stood by his rights to refuse.

The implications of the hearing, which could extend into Sunday and is not expected to deliver an outcome until Monday at the earliest, stretch far beyond the rugby pitch.

It has angered Christian conservatives in Australia and triggered a wider debate about freedom of speech and the power of employers to control their employees away from the workplace.

In an online survey by conservative newspaper, The Australian, 89 percent of the more than 20,000 respondents voted ‘no’ to the question of whether Folau should be sacked for his social media posts.

Many of the voters said they would boycott rugby if one of Australia’s few world class players is banished from the game.

The outcome of the hearing will be divisive whichever way it falls, with RA under pressure from commercial sponsors and LGBT groups to follow through on its hard line.

A victory for RA might only serve to open up more formal litigation as Folau fights for his employers to honour a contract reported to be worth A$4 million ($2.80 million).

It could also cause tensions with other Wallabies players of Pacific islands heritage who make up nearly half the squad — many sharing Folau’s Christian beliefs.

Victory for Folau, however, may only be pyrrhic at best, given Wallabies coach Michael Cheika has said he could no longer select him.

A number of his senior team mates, including captain Michael Hooper, have also said it would be hard to play alongside him.

Win or lose, Folau is as unlikely to budge on his insistence to air his beliefs on social media as Rugby Australia is to humour them.

The stand-off may hinge upon the idea of inclusion but will probably end up with Folau lost to Australian rugby forever.