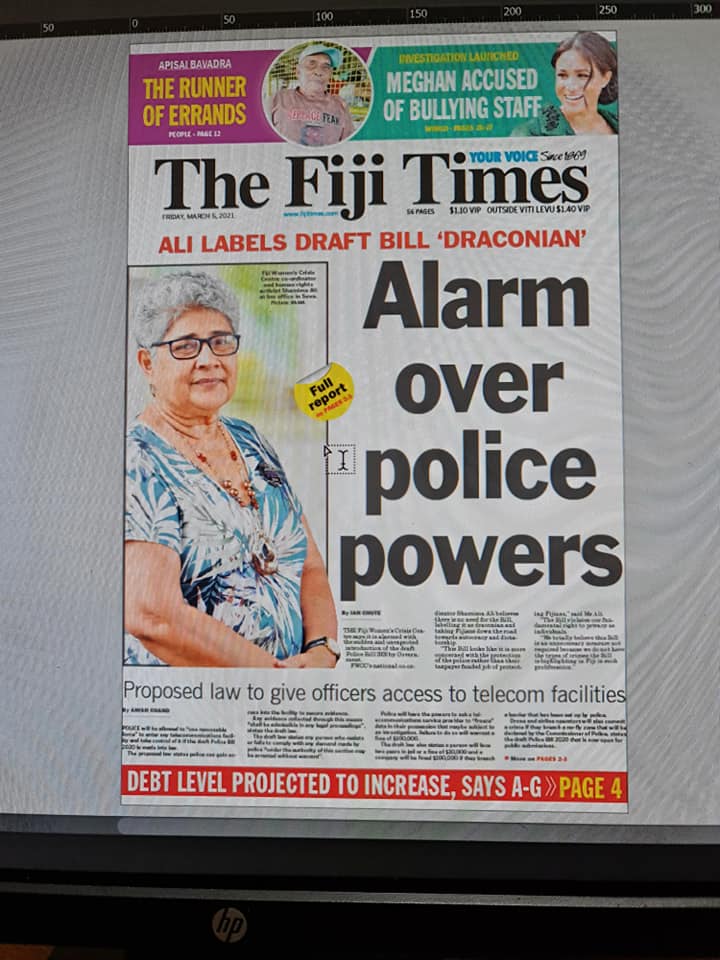 The big one on Page 1 is about the Draft Police Bill. 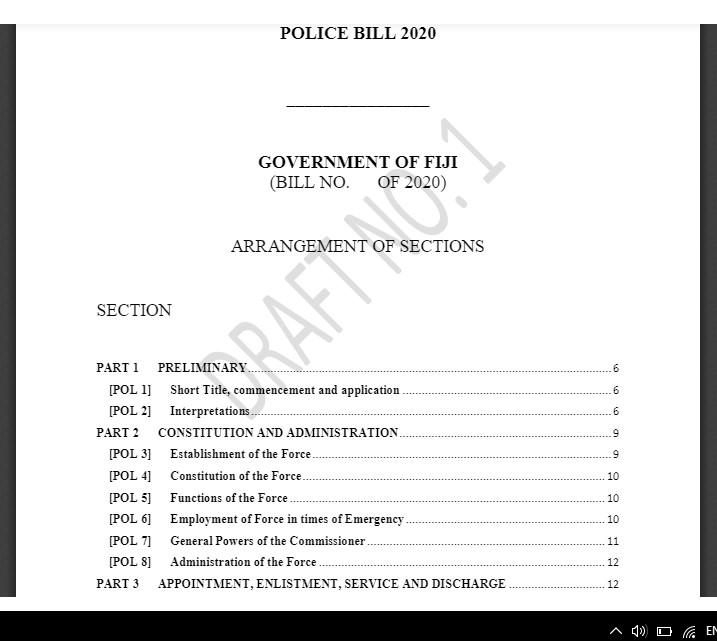 The Fiji Women’s Crisis Centre says it is alarmed by the sudden and unexpected introduction of the draft Police Bill 2020 by Government. FWCC’s national co-ordinator Shamima Ali believes there is no need for the Bill, labelling it as draconian and taking Fijians down the road towards autocracy and dictatorship.

The second report on the page is about how police will be allowed to “use reasonable force” to enter any telecommunications facility and take control of it if the draft Police Bill 2020 is made into law. The proposed law states police can gain access into the facility to secure evidence. 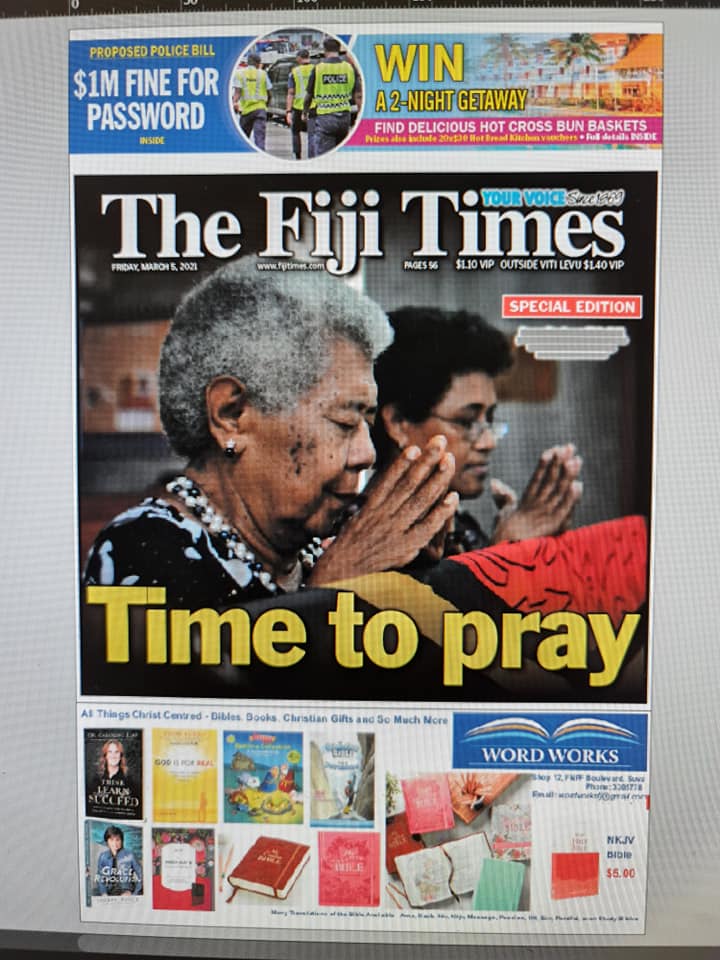 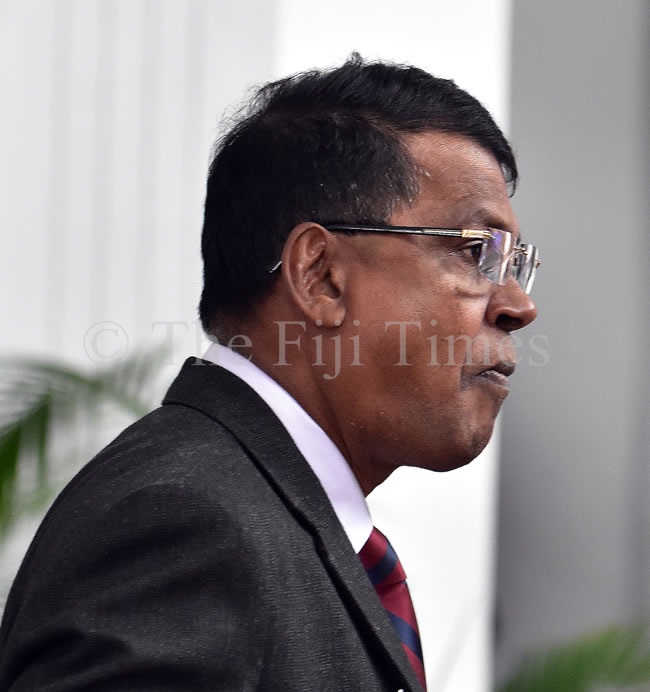 Telecommunications service providers will face fines of $1,000,000 if it refuses to release passwords, encryption and biometrics to the police, states the draft Police Bill 2020.

The Ministry of Defence is now seeking public submissions on the draft law before it goes to Cabinet endorsement and then to Parliament.

Police will have the powers to ask a telecommunications service provider to “freeze” data in their possession that may be subject to an investigation. Failure to do so will warrant a fine of $100,000.

The Commissioner of Police will have the powers to declare certain areas as no-fly zones, states the draft Police Bill 2020 that is now open for public submissions. 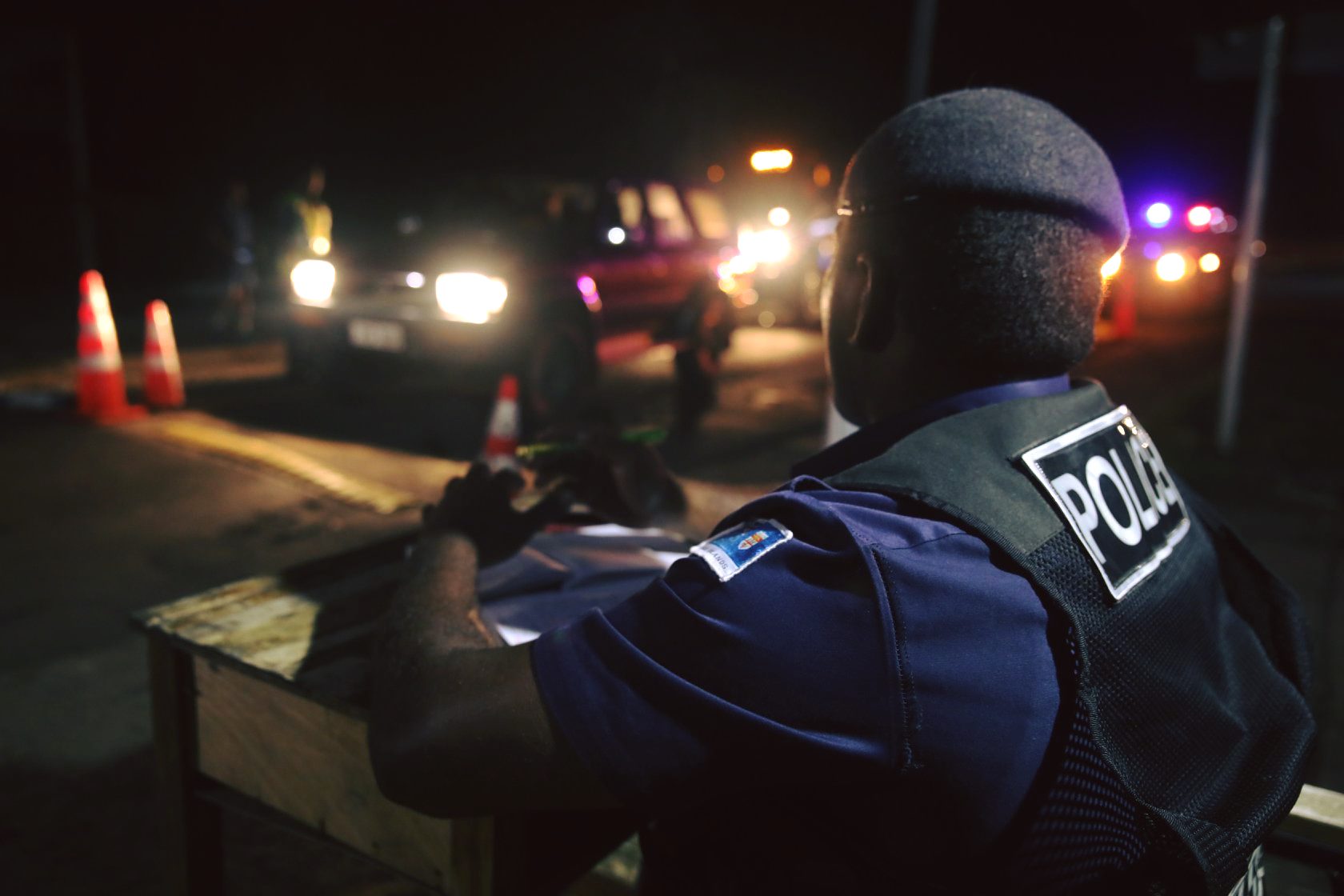 Police on guard at a checkpoint during curfew hours. Picture: SUPPLIED

Police will have the powers to “use reasonable force to gain access to and gain control of any telecommunication facility, service or network” to secure evidence.

The draft Police Bill 2020 can be used to silence government opponents, says Fiji Labour Party (FLP) leader, Mahendra Chaudhry. He made the comment after the introduction of the Bill that in its current state will give police never before seen powers in the name of preventing crime and bringing criminals to justice.

BACK IN HISTORY: PAGE 6

This reunion story of siblings took place more than 50 years ago and was certainly an emotional experience. Tears flowed freely as Fred Elbourne and sister, La’a Sun, met for the first time after 63 years as reported in The Fiji Times of September 11, 1991.

LETTERS TO THE EDITOR:

Here’s a brief on what some writers are thinking about:

* I think the CSO alliance is right for asking the Attorney-General to reduce his work load. All work and no play has made you sick my bro…

Kiran Lata, 54, (left) and Daya Wati, 66, sell vegetable that they buy from the farmers at the Suva market.
Picture: SOPHIE RALULU

* Social media may not be the internet darling it once was. I have lost faith in some social media pages…

* Would it be possible to make public the identities of those individuals who contributed in drafting the proposed Police Bill 2020?… 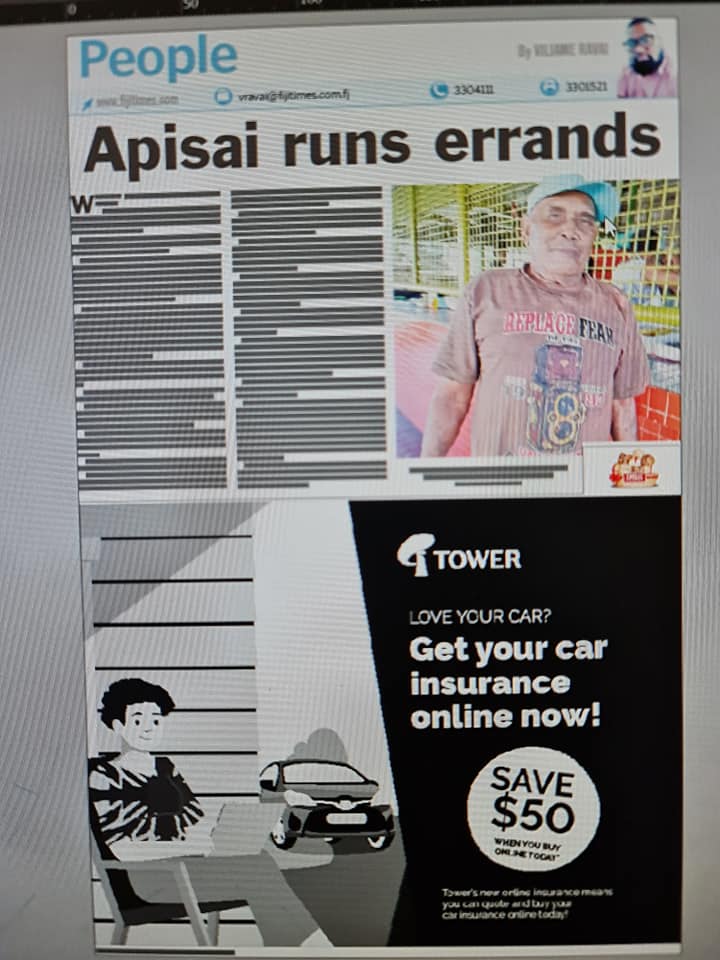 In the ever popular People column, it seems it is normal to ask: “Where’s Apisai? I need him to run an errand.” That’s the usual call by women at the Suva Municipal Market cafeteria when they can’t leave their stalls unattended to tend to other matters. Apisai Bavadra, 64, has built a relationship on trust simply offering his service as a “runner of errands” for a small fee.

The news of the indefinite closure of the sleeping giant was a disappointment for many indigenous, local visitors and foreign nature lovers since this destination was a treasure house for indigenous plants of Fiji with a collection of spectacular orchids. 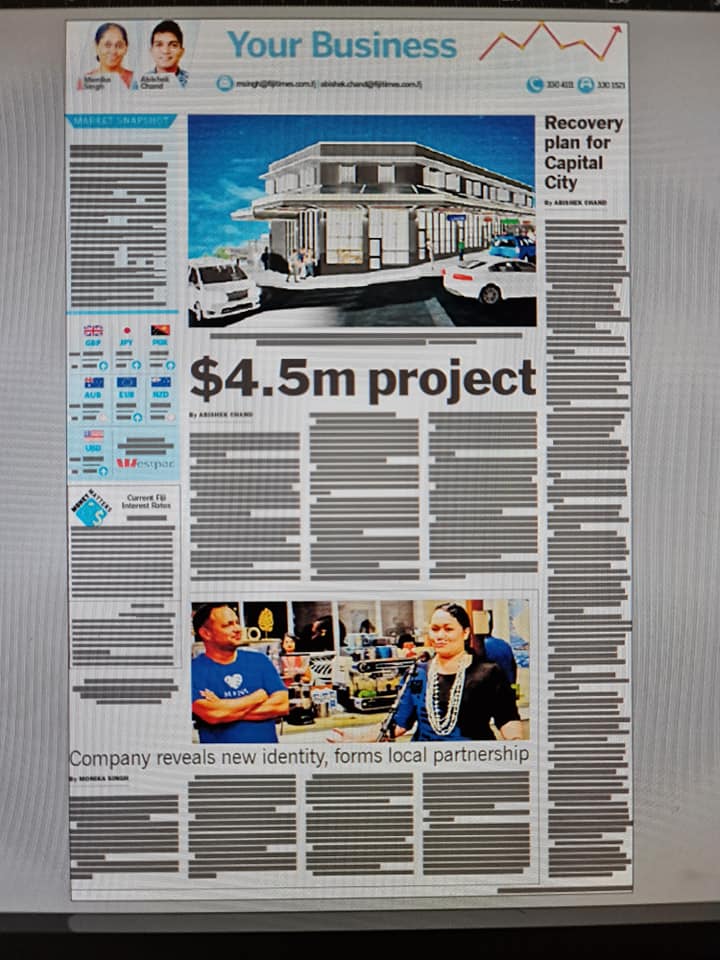 A local entrepreneur believes that it is important for local businesses to support each other and help drive Fiji’s economy. Mana Coffee, previously Weta Coffee (Fiji) director Mue Bentley Fisher made the comment as they launched their new identity at their flagship café in Suva on Wednesday.

The United Nations Economic and Social Commission for Asia and the Pacific “Building Urban economic resilience during and after COVID-19” workshop would likely assist the city of Suva to put in place an implementation plan for recovery.

A private investment group is set to develop a two-level commercial building with a completed value of $4.5 million. The Mount Sophia Group announced its latest commercial development which is the Toorak Central located on the corner of Amy and High streets in Toorak, Suva.

Soccer in the country is expected to soar after the Fiji Football Association struck a multi-million dollar sponsorship deal with Digicel. The three-year sponsorship worth $2.85 million has seen the company become the new official sponsor. 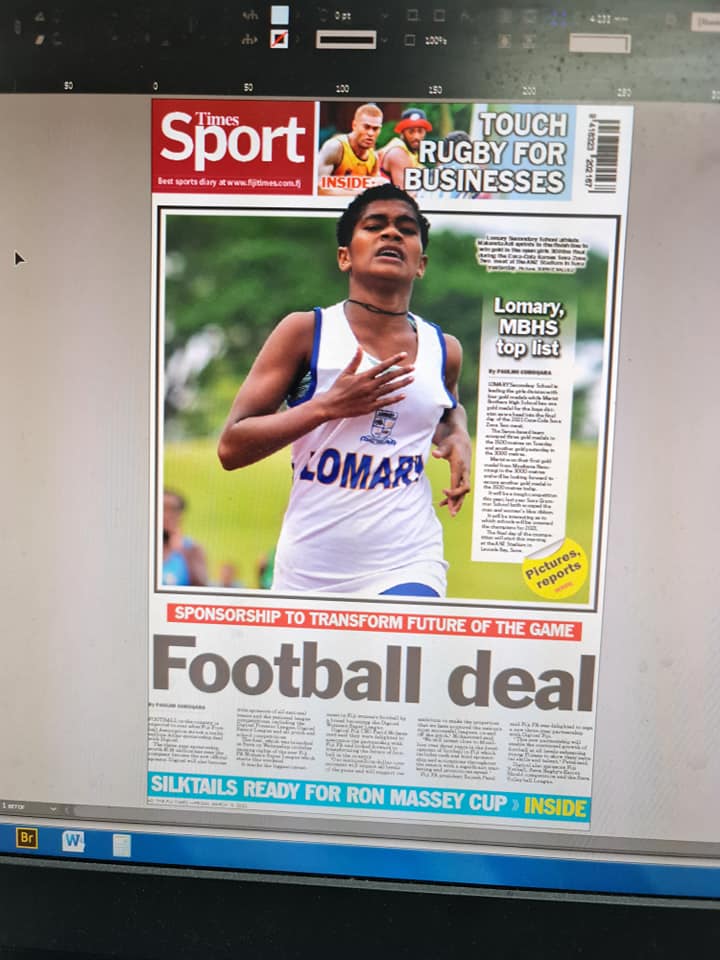 Lomary Secondary school is leading the girls division with four gold medals while Marist Brothers High school has one gold medal for the boys division as they head into the final day of the 2021 Coca-Cola Suva Zone Two meet. The Serua-based team scooped three gold medals in the 1500 metre race on Tuesday and another gold medal in the bag yesterday.

There’s a lot more to read inside but you’ll have to get a copy to know what we are talking about!