In Sri Lanka, a polarizing politician reaches out to minorities but suspicion lingers 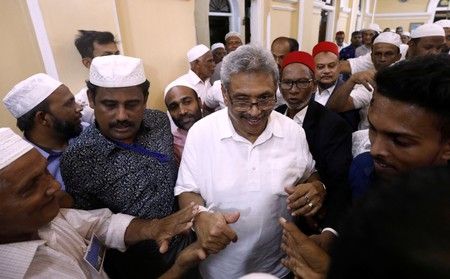 BERUWALA, Sri Lanka (Reuters) – Sri Lanka presidential candidate Gotabaya Rajapaksa has been a polarizing figure for much of his political life. It is an image he is trying to change.

When he was defense chief in his brother Mahinda Rajapaksa’s government he crushed ethnic Tamil separatist rebels, bringing a 26-year-long civil war to a close. But relatives of dead or missing Tamils have accused him of war crimes, including extra-judicial killings and abductions, in lawsuits filed against him in the United States.

Rajapaksa has denied the accusations.

His failure to publicly distance himself from radical Buddhist monks makes him a figure of suspicion in the minority Muslim community, as well as among some in the small Christian community.

In 2013, he was chief guest at the opening of a leadership academy run by a hardline Buddhist group, the Bodu Bala Sena (BBS). Groups such as BBS see the minorities as a potential threat to the Sinhala Buddhist majority in Sri Lanka.

But that hasn’t stopped Rajapaksa and his Sri Lanka Podujana Peramuna (SLPP) party from seeking to woo Muslim and Christian voters after he recently declared he was standing in the election due to be held by Dec. 9.

His overtures might work in parts of the Christian community fearful after Easter Sunday bombings of churches and hotels by Islamist militants that killed 250 people.

Some Christians say they are looking for stronger security policies, even if that means going with a hardliner like Rajapaksa.

But Muslims are less convinced because they suspect a Rajapaksa government may turn a blind eye to attacks by Buddhist extremists. That is what some say happened in 2014 when anti-Muslim riots in the southwestern Kalutara district displaced thousands during the time of his brother’s presidency.

A spokesman for the Rajapaksa’s SLPP, Keheliya Rambukwella, said the riots were orchestrated to turn Muslims away from the Rajapaksa camp.

As a politician who respected all communities and religions, Rajapaksa was doing the “right thing” by visiting houses of worship, Rambukwella said.

“It gives a message very clearly that he wants communal harmony.”

Rajapaksa’s office declined a request for an interview with him.

He has yet to tour the Tamil-dominated north and east of Sri Lanka but has said he would work toward fulfilling their aspirations, including more regional autonomy.

Relatives of Tamils missing since the end of the war, former cadres of the Tamil Tiger insurgent group and people who say their land has been occupied by the military, interviewed by Reuters in recent days, said they feared a military clampdown if Rajapaksa rose to power.

But one Tamil party, the Eelam People’s Democratic Party, is pro-Rajapaksa and says only his leadership can fulfill regional demands.

Muslims account for about 10% of the island nation’s 21 million population and Christians nearly 7%.

Muslims would not be safe if Rajapaksa won the presidential election, said A.R.M Badiuddin, a former local council head in Dharga Town, about 80 km south of Colombo, which was caught up in the 2014 riots.

“The Rajapaksas have betrayed us,” said Badiuddin, on a day Rajapaksa was due to visit a historic mosque, near his village home.

BLESSINGS AT THE MOSQUE

On Aug. 17, the centuries old Kechimale Mosque, which looks out over the Indian Ocean, was unusually busy for a Saturday evening as it prepared for the first ever visit by Gotabaya Rajapaksa and his brother, Mahinda. Hundreds waited for nearly four hours before they arrived in the late evening.

Inside the mosque, a cleric sought blessings for Gotabaya Rajapaksa so he could ensure “unity and equality for all ethnicities in Sri Lanka”.

Clerics said they welcomed everyone, declining to comment on the politics of the visit.

Rajapaksa is also trying to win over Sri Lanka’s Catholics, many of whom have traditionally voted UNP.

This month, he met senior Catholic priests in Kandy and Matara. He recently said his government would promptly act on a demand by the Archbishop of Colombo to set up an independent panel to investigate the Easter bomb attacks.

Some were skeptical of the motive but said Rajapaksa, nevertheless, might win the support of Christians.

“Everything is done to win votes, not in a genuine way,” a senior clergyman told Reuters on condition of anonymity/

“There is a possibility this time that Catholics will vote for Gotabaya.”

Mahinda Rajapaksa’s wife, Shiranthi, is Catholic and the couple met the Pope at the Vatican in 2014 and during his 2015 Sri Lanka visit. Shiranthi also donated land and money to a Catholic church in Colombo during Rajapaksa’s term.

“They helped us a lot”, the clergyman added.

But Rajapaksa’s authoritarian style worries many Protestants, who make up about 2% of the population.

“People are waiting to see whether he would actually say that he is moving from a very hardline stance to a more moderate stance,” said Godfrey Yogarajah, deputy secretary general of the World Evangelical Alliance.

“We haven’t heard him say anything at all to that effect.”