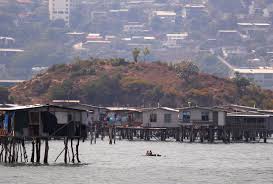 The Wanigela settlement in Port Moresby looks out directly over APEC Haus, but might as well be a world away.

With the South Pacific nation’s rainy season looming, Wanigela’s thousands of residents are packed together in overcrowded and dilapidated dwellings with no sanitation and unreliable electricity supplies.

For all the hope and promise the APEC summit would put PNG on the world stage – and attract investment that will translate into jobs and infrastructure – many are questioning how such an international event will benefit their everyday lives.

“The government says APEC is going to improve our lives, but I don’t know, because our politics is not trustworthy,” said Bradley Kalau, 31, who has been unemployed for two years. “We find it very difficult because of a lack of education. It’s hard to find jobs and put bread and butter on the table.”

Close to half of Moresby’s population of around 310,000 live in informal or squatter settlements, according to a 2015 study by the Pacific Region Infrastructure Facility.

The impoverished communities suffer from chronic unemployment and are prone to crime and gang violence, laying bare the socio-economic problems that will persist long after the APEC leaders depart.

Kalau lives in a small wooden stilt-house perched on the rocky shores of Ela Beach, around a kilometer from an upmarket resort that hosted numerous APEC delegations.

He lives under one roof with his wife and 30 other relatives spanning four generations, including siblings, cousins, nieces and nephews.

“The style we are living right now, it can change,” Kalau’s younger cousin Junior Kalau said. “Everything. Us getting jobs. We need our own house.”

PNG, roughly the size of California, has more than 7.3 million people scattered over its mountainous interior and hundreds of small islands.

While rich in minerals, timber, fish and energy resources, most rural people live subsistence lives and annual per capita GDP is around $3,600 a year, according to the IMF.

Moresby’s shanty settlements, some decades-old, are mostly home to migrants from other parts of PNG who move to the capital to escape rural poverty and seek better access to social infrastructure including education and healthcare.

But a severe shortage of jobs and affordable housing has seen settlement populations swell out of control, with multiple families often sharing one roof, mostly pooling incomes from odd jobs and selling produce at street markets.

Many in gainful employment are also forced to live in ramshackle settlement dwellings.

Despite holding down a respectable civil servant’s job with the national postal service, Banian Masiboda said “reasonable housing” remained out of reach.

Masiboda said too many people attracted by the “bright lights” of Port Moresby arrived unprepared.

He said many questioned the wisdom of spending big on APEC when then were more immediate priorities to address at home.

At the meeting, the United States, Australia, New Zealand and Japan did announce a $1.7 billion plan to ensure most of PNG had access to electricity by 2030.

Still, the view among many in the settlements was that APEC catered to the political ambitions of the elite while neglecting the masses. That was only reinforced when security personnel forced their way into parliament to demand unpaid wages, just two days after the summit ended.

“We did not look after own backyard first, but then we boldly stood up and said ‘Yes, we can host APEC’,” Masiboda said.

The forum’s chairman, PNG Prime Minister Peter O’Neill, said in his closing remarks at APEC that the region had to focus on reducing trade barriers to ensure prosperity for all people.

“APEC leaders continue to focus on efforts trying to reduce inequalities,” he told reporters in Port Moresby on Sunday.

In the nearby squatter settlements, communities feel the gap between rich and poor is as great as it’s ever been.

“If we feed our own mouths, there won’t be any crime,” Bradley Kalau said.

“We feel left out. We are rich in our natural resources, but we are beggars in our own country.”