In Haiti, protests wane, some schools open but crisis far from over 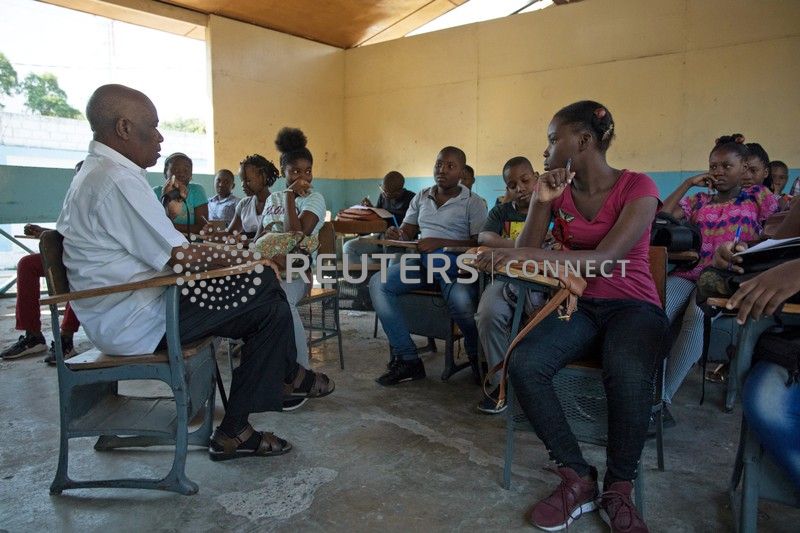 A teacher gives a lesson to students at the College Saint Pierre-Eglise Episcopale D'Haiti as schools and businesses tentatively reopen their doors after anti-government protests are waning, in Port-au-Prince, Haiti December 3, 2019. REUTERS/Valerie Baeriswyl

PORT-AU-PRINCE (Reuters) – Anti-government protests in Haiti are waning, with schools and businesses trying to re-open in the face of political gridlock and heightened violence in the Western Hemisphere’s poorest country.

Demonstrations began in September against President Jovenel Moise over allegations of corruption and mismanagement, paralyzing the Caribbean island nation of 11 million. Protesters have barricaded roads and the electrical grid has broken down, plunging much of the island into darkness. Gangs have profited from the chaos to expand their territory.

Haitians have wearied of disruptions, and crowds at recent protests are down to the hundreds from tens of thousands at the height of the crisis. The political opposition insists that the government has lost control of the country.

Yet many question whether the opposition can dislodge the president. Washington has pledged Haiti more aid, and U.S. Under Secretary of State for Political Affairs David Hale is expected to arrive on Friday.

Attempts to return to normalcy have been tentative and precarious.

Hawkers are returning to sell wares on town sidewalks. Schools are re-starting some classes, mostly at reduced hours. With the sound of gunfire still common, pupils have been urged not to wear uniforms that would aggravate protesters.

“We are afraid of reprisals,” said Rosette Romelus, director at a primary and secondary school in Port-au-Prince. “Parents are stressed as well as the pupils … When parents heard shots this morning they left with their children.”

A nearby high-school for girls re-opened only for two classes studying for exams. The mood was tense, as shots were heard in the distance.

“We don’t want to increase the number of pupils yet because of the political situation,” said Mackenson Bonhomme, an administrative staff member. “We cannot guarantee the safety of the children.”

“We’re afraid of missing a year of school,” said Kerlange Augustin, 16, disappointed that her class was not returning.

Several school directors said they hoped all classes would restart in January. Almost all Haitian schools are private, and some parents say they lack money for fees because the crisis has prevented them from working.

So far, police have only been able to unblock highways temporarily. Barricades have been re-erected leaving provinces cut off.

Some opposition factions are calling for a demonstration on Thursday in the northern town of Gonaives and a march on Friday in the capital to the U.S. embassy to demand Washington stop propping up the government.

“I do not understand why the international community continues to back a head of state who cannot guarantee the stability of his country and who is rejected by his people,” top opposition leader Andre Michel told Reuters.

Moise, whose election came with fraud allegations and a voter turnout of just 21%, has vowed to serve until his mandate ends in 2021. Fuel shortages sparked this latest wave of protests, the worst by far since demonstrations began in mid-2018.

Haitians are frustrated with frequent blackouts, while inflation has surged to around 20 percent, leaving foodstuffs and other goods out of reach for many.

The opposition rejected Moise’s offer of a unity government, and has blocked appointment of a prime minister, leaving Haiti unable to unlock needed funds from the International Monetary Fund and other sources.

Authorities have failed to organize new parliamentary elections. From January there will be no legislative body, meaning Moise will rule by executive decree. Many fear the government must limp along as the crisis worsens.

“Transition imposes itself,” opposition leader Michel said, “and if not today, then tomorrow.”