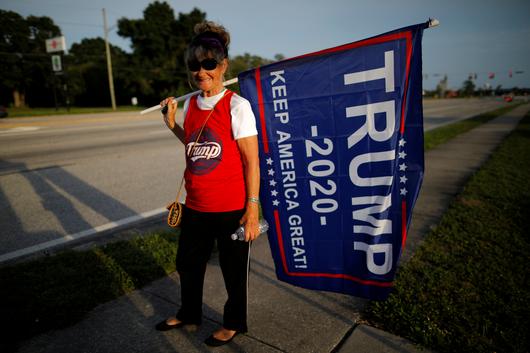 Politics July 20, 2019 / 7:48 AM / Updated 5 hours ago In battleground Florida, Republicans shrug off Trump's tweet 'kerfuffle' Letitia Stein 6 Min Read PALM HARBOR, Fla. (Reuters) - An immigrant to the United States, Suzanne Vale took no offense at Republican President Donald Trump’s tweet this week telling Democratic congresswomen they are free to “go back” to their ancestral homes if America is not to their liking. FILE PHOTO: Robin Mayo holds a Trump flag during a roadside sign waving rally with supporters of U.S. President Donald Trump in the Pinellas County city of Clearwater, Florida, U.S., May 15, 2019. REUTERS/Brian Snyder/File Photo

PALM HARBOR, Fla. (Reuters) – An immigrant to the United States, Suzanne Vale took no offense at Republican President Donald Trump’s tweet this week telling Democratic congresswomen they are free to “go back” to their ancestral homes if America is not to their liking.

She disagrees with critics who accuse Trump of race-baiting with his attacks on the four women of color.

“I don’t care what you are – what religion, where you come from,” said Vale, 61, a Trump supporter from England who also voted for Democrat Barack Obama, America’s first black president. “If you believe the same things we believe, you are welcome.”

Vale’s views were quietly echoed Thursday night around white-clothed tables at an Italian restaurant during the monthly meeting of a local Republican club in Pinellas County, Florida, the largest county that swings between the political parties in presidential elections in America’s largest swing state.

A day after a crowd at a raucous Trump rally in North Carolina chanted “send her back” about one of the Democratic women, Somali-born U.S. Representative Ilhan Omar of Minnesota, these Republican voters in Florida focused their agenda on a discussion with their local sheriff about traffic and avoiding tickets under a new state law that banned texting while driving.

The group of suburban Republicans, mostly around retirement age in collared shirts and slacks, showed none of the hostility to the news media common at Trump’s rallies and welcomed a Reuters reporter’s questions about the political maelstrom swirling after what Elise Kay, 61, called the president’s latest tweetstorm “kerfuffle.”

“Our president has an unfortunate habit of distracting with tweets,” Kay said. “It’s just silliness. But the economy is not silly. It’s doing great, and I am afraid if we don’t re-elect the president, that will stop.”

Democrats and some Republicans have criticized Trump’s attacks on Omar and fellow U.S. Representatives Alexandria Ocasio-Cortez, Rashida Tlaib and Ayanna Pressley as racist, along with denouncing the subsequent rally chants. Republican support for Trump, however, rose by 5 percentage points to 72% after his weekend tweetstorm, a Reuters/Ipsos public opinion poll showed.

Sitting across the table from Kay, retired Postal Service worker John Keller, 58, lamented how the president’s statements were often blown out of proportion, though he said he would not have used Trump’s exact words.

He said the congresswomen known as “the squad” use their own inflammatory rhetoric against Trump, calling him a fascist and at times refusing to refer to him by his title of president.

“It’s always, ‘the president should take the high road.’ But anybody in Congress should also take the high road,” he said. “What I’d really like to see happen is both sides stop this and take care of business.”